Congrats to the Steelers

Share All sharing options for: Congrats to the Steelers

The Steelers won the Super Bowl, beating Seattle 21-10. That's a team that just gutted up at 7-5 and ran the table all the way to the end.

And congratulations and best wishes to Jerome Bettis, one of the true class acts in sports, as it looks like he's decided to retire, having raised the Lombardi Trophy at last.

As many of you know, I am a Michigan football fan. When I was but a young boy, Notre Dame's Jerome Bettis absolutely demolished the Michigan defense on one run. Now, Notre Dame is a chief Michigan rival. They are the two winningest programs in 1-A history. But with that run, even a Michigan fan whose team had just been embarrassed on the field had to respect Jerome Bettis. I've been a fan of his since that moment, because it was one of those moments you just can't help but be in awe of. No doubt you've seen that run at some point, and if you haven't, you should. 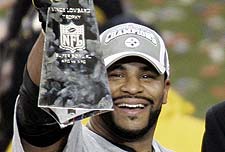