Bowie Kuhn passed away Thursday at the age of 80. He died from complications of pneumonia; he'd had heart surgery a few years ago. 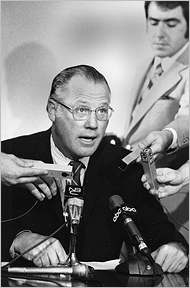 From his obit in the NY Times:

In Kuhn's tenure as baseball's fifth commissioner -- from 1969 to 1984 -- attendance, salaries, television revenue and franchise values soared, the major leagues expanded into Canada and realigned into divisional play, the World Series became a night-time spectacle, and players won the right to free agency and staged their first strikes.

Kuhn was in the midst of the storms. He fined or suspended high-profile owners like the Yankees' George Steinbrenner, the Oakland Athletics' Charles O. Finley and the Atlanta Braves' Ted Turner. He struck down million-dollar sales of star players, vied against the players' union leader, Marvin Miller, and fended off threats to his job.

Kuhn viewed himself as a lifelong fan determined to uphold the integrity of baseball, promote competitive balance and enhance the game's marketing, all the while bemoaning sharply rising salaries that he claimed imperiled the sport's financial viability. But to his detractors, he was often self-righteous, pompous and inconsistent in his rulings, and subservient to the owners who hired him.

...When Kuhn became commissioner, baseball was often derided as slow and dull in comparison with pro football. Baseball became revitalized in Kuhn's years as commissioner, but management's battles with [player's union leader Marvin] Miller and the players' union overshadowed the turnaround.

"There was about Miller a wariness one would find in an abused animal," Kuhn wrote in "Hardball," his memoir. "It precluded trust or affection."

...Upon losing his bid for a third term, Kuhn summed up his perception of the commissioner's mandate in offering advice for his successor.

"He'll be told, for instance, that legalized gambling and baseball are perfectly compatible and that we can even turn a profit from the relationship," Kuhn wrote in The New York Times. "He should tell the compromisers to get lost. They are burglars of our patrimony. They will never understand the threat to baseball posed by such things as legalized gambling, sports betting, drug abuse and undesirable associations. He should use his powers fearlessly to protect the integrity of the game. The critics will call him self-righteous and moralistic. Have courage. Ignore them."

His tenure was marked by labor strikes (most notably in 1981), owner disenchantment, and the end of baseball's reserve clause, yet baseball enjoyed unprecedented attendance gains (from 23 million in 1968 to 45.5 million in 1983) and television contracts during the same time frame.

Kuhn suspended numerous players for involvement with drugs and gambling, and took a strong stance against any activity that he perceived to be "not in the best interests of baseball."

In 1970, he suspended star Detroit Tigers pitcher Denny McLain due to McLain's involvement in a bookmaking operation. He barred both Willie Mays (in 1979) and Mickey Mantle (in 1983) from the sport due to their involvement in casino promotion; neither was directly involved in gambling, and both were reinstated by Kuhn's successor Peter Ueberroth in 1985.

Also in 1970, Kuhn described Jim Bouton's Ball Four as "detrimental to baseball" and demanded that Bouton retract it. The book has been republished several times and is now considered a classic.

On October 13, 1971, the World Series held a night game for the first time. Kuhn, who thought that baseball could attract a larger audience by featuring a prime time telecast (as opposed to a mid-afternoon broadcast, when most fans either worked or attended school), pitched the idea to NBC. An estimated 61 million people watched Game 4 on NBC; TV ratings for a World Series game during the daytime hours would not have approached such a record number. Kuhn's vision in this instance has been fulfilled, as all the World Series games are now shown in prime time.

Would that baseball still had commissioners with integrity and foresight such as it enjoyed in its earlier years.