A pretty much off-topic diary.

It was fun for me to hear about SC's "idiotic cat" for the first time in his post the other day. And I also enjoyed Titov's reference to said cat in another thread.

And I found myself wondering if most CC people are "cat" people or "dog" people. (I know there are some folks who swing both ways, as it were, but deep down I think everyone aligns with one species or the other).

Me, I'm a cat person, and have been all my life. Consider this a thread to brag on your felines. Dog people can jump in as well; or start your own thread, with nowhere near as punny or alliterative a title.

When I grew up, we had no fewer than four or five cats in the house most years. I went from that menagerie to having none during college or my first few years thereafter, but then suddenly somehow wound up with four cats as an adult in 1991. They were all related to each other. Two of them are still with me. They all have French-themed names, and I won't even begin to say why, as it's a boring story. They are/were: 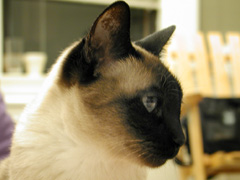 Brittany, the mother of the other three; a regal, queen-like Siamese with gorgeous blue eyes and an intelligent air about her; passed away of breast cancer five years ago at the young age of 13; 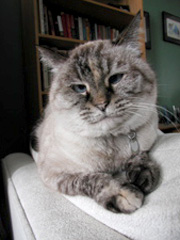 Normandy, a daughter of Britt's who came with her; was a loner for most of her time with me, but has recently come out of her shell in her old age; now 16 years old; 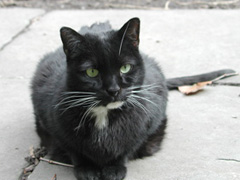 D'Artagnan, named for the fourth musketeer; the only male, and the sweetest, most endearing all-around cat I've ever owned; just a big (really big) lump of lazy contented cat; I loved the cream mark on his chin and (you can't see them) his white socks; he passed with a lung tumor in 2004, also at 13; 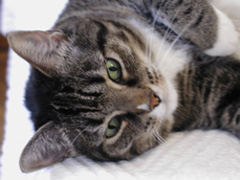 Bistro, nicknamed "the Beast", because she's one of those psycho cats that rubs all over you and then freaks out and takes a swipe, often drawing blood in the process; she and D'art were of the same litter, and were born after I got Britt and Norm from my brother; she's still with us, turns 16 this year.

They couldn't all look or be more different from each other, but they have been a wonderful cat family over the years. And Norm, at least, is an O's fan. Whenever I'm watching MLB.com, she walks up to my laptop and settles squarely in the center of my keyboard. She's reeeeal subtle about it.

This may wind up being a one-post diary (I mean really, who has the time?), but if you get a chance share a little cat love here!