Do the Phillies have the 2008 postsesaon's best fans? Answer: yes. 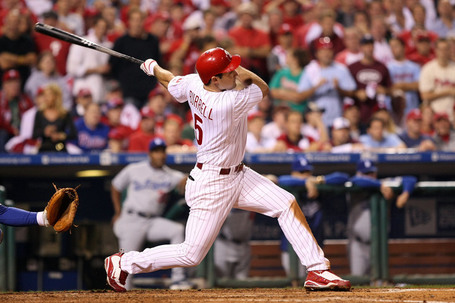 Into the bottom of the sixth, Derek Lowe was cruising, Manny Ramirez had struck in the first inning with an RBI double, and the Dodgers were up 2-0, looking like the team that swept the Cubs.

Sixth inning comes along, Chase Utley hits a two-run bomb to tie it, and then two batters later, Pat Burrell goes deep, putting the Phillies up 3-2, a lead they'd hold for good to go up 1-0 in the NLCS.

Cole Hamels went seven strong innings (2 ER, 8 K, 2 BB) and the bullpen held it down with Ryan Madson and Brad Lidge for the final two.

The most exciting part of the game, besides all the tense moments and the home runs and the good baseball, was probably Derek Lowe and Shane Victorino colliding.