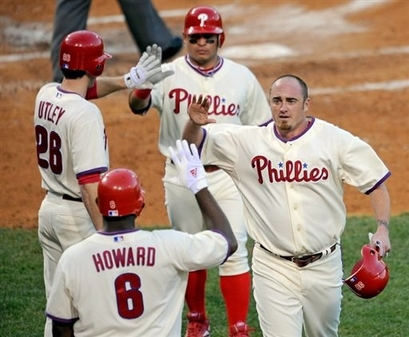 Yeah, Myers went 4-for-58 with 3 RBI in the entire regular season, and he's 4-for-5 with 3 RBI this postseason, including 3-for-3 with all those RBI yesterday. The most amazing thing, though, is he almost fell over between second and third base at one point, and later conked himself in the back of the head on his backswing. Pretty hilarious, really. What can you do? The dude's in the zone.

At the plate, anyway. His pitching was not as impressive, as he went five innings with five earned on six hits, four walks and six strikeouts. The Phillies win either way, and Myers' 3 RBI wind up being the difference.

Manny Ramirez went deep again, and a long fly to center from Casey Blake threatened to rally the Dodgers back into a tie game late, but Shane Victorino went back to the wall and grabbed it out of the sky with a mildly leaping catch.

With the Dodgers burning through six pitchers in the game, their rotation is now set only so far as Hiroki Kuroda will start game three on Sunday.

This is a good photo: 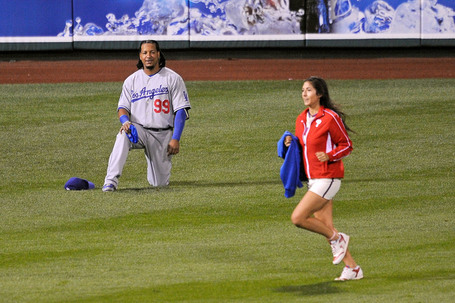 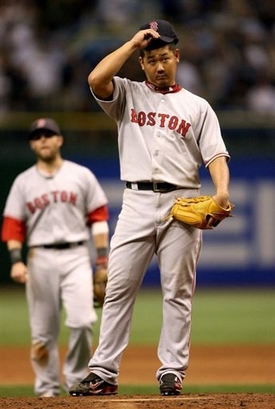 Earlier on SportsCenter, Buster Olney said that Daisuke Matsuzaka was the biggest question mark for Boston in this postseason.

Mike Lowell being out, forcing Mark Kotsay into first base and Youkilis over to third, and Beckett being iffy, and hoping that J.D. Drew doesn't come up lame again -- but Daisuke Matsuzaka (18-3, 2.90 ERA) was the biggest question?

No matter, Daisuke threw a no-hitter into the seventh inning and put in a performance you might count as "brilliant" if you're someone that goes bananas over David Lynch films. He made no sense and he took forever, but in the end, pretty good.

Home field advantage is now gone, which is made too big a deal, probably. There are still three games left at Tampa Bay should it go seven, and three games in Boston. Big whoop. I don't go in for home field advantage so much at this stage, which might seem like the exact time to go in for it, but it just doesn't make or break anything, I don't think. These are all really good teams still playing.

The scoring came on a Jed Lowrie sac fly in the fifth and a Youkilis double in the eighth, securing the win. Jonathan Papelbon extended his postseason scoreless innings streak to 20 2/3.

Tough loss for the Rays, too. James Shields pitched a hell of a game and the bullpen shut it down as they have been doing, but they just didn't score. Can't win without a run.