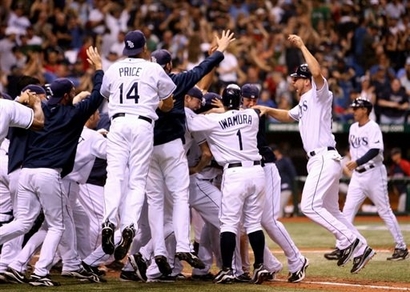 I caught the start of this game, and after the boxing on Showtime and the finish of Oklahoma State-Mizzou, caught the last few innings.

Quite a game, as far as I could tell. Pedroia went deep twice, Youkilis and Bay both homered, and the Red Sox still lose. Oh Mike Timlin! I missed the Pedroia HR, followed two batters later by Youkilis' and then Bay's right after that, which kinda stinks. Home runs are cool. The Rays hit a few themselves (Longoria, Upton, Cliff "Pink" Floyd).

They have a travel day now and head to Boston. Woo hoo!