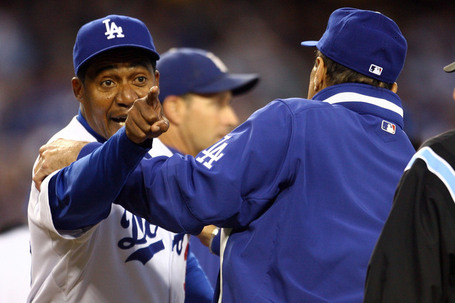 If only. The only guys that really looked like they might or genuinely wanted to throw down were coaches Mariano Duncan and Davey Lopes. Duncan was livid, while Lopes was like, "Fool, please."

Manny looked angry, but the Dodgers dragged him into the dugout, as McCarver disgustedly remarked, "Dodger players taking their meal ticket to the dugout." It doesn't matter that he's right that Manny is probably the biggest reason the Dodgers are here; it's enough out of McCarver as pertains to Ramirez. We get it, Timbo, you don't like him.

The fighting started after Hiroki Kuroda threw one over Shane Victorino's head, responding to Russell Martin being hit and Manny Ramirez having one go behind him. Dodger hitters have complained that their pitchers haven't had their backs, and Kuroda took the ball and winged it. Victorino motioned to hit him in the ribs, not in the head, which is fair enough -- throwing at someone's head is inexcusable. Martin was hit again later, but it was clearly not on purpose, as it was a breaking ball. Dudes don't get hit with breaking balls on purpose.

As for the game, the Dodgers beat the living hell out of Jamie Moyer and had it sealed in the second inning.