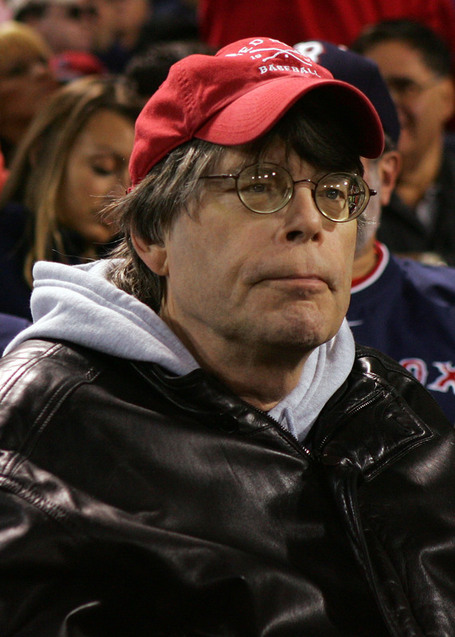 OK, seriously -- can someone get the TBS crew of Chip Caray, Buck Martinez and particularly Ron Darling to come the F off it a little bit?

Darling is so unyieldingly amazed by the fact that the Tampa Bay Rays are in the ALCS that he assumes the rest of the planet literally cannot believe it and thinks they're in a feverish dream world, just like the one he believes has overtaken his slumber.

Darling at one point remarked that if you were a Red Sox fan -- and he paints Red Sox Nation as a collection of stammering know-nothings who are unaware that the Rays were good this season -- and you jumped in the shower, and you came out and said, "Hey, what's the score of the Red Sox game?" and the answer came back, "5-0 Tampa," you would go, "NO, SERIOUSLY. THAT MUST BE A LAUGH RIOT OF A JOKE! A HUMDINGER! But, for real, I would like to know the score of the Red Sox game. Surely, they are winning without any trouble. Nevermind that this is the ALCS and Tampa Bay won 97 games this season and beat the tar out of Chicago in the ALDS. Surely -- surely! -- the Red Sox are making mincemeat of this alleged 'team.'"

Also, if you're one of these Red Sox fans that didn't know that Tampa Bay had a good team, you undoubtedly thought to yourself yesterday, "Who is Matt Garza to be dominating our amazing lineup? Matt WHO?"

In short, I know lots of you poke at the Red Sox fans, and sure there are some dumbos in the group. Like Stephen King (I jest!). But anyway, I wish Ron Darling would stop assuming that the viewing audience is as uninformed as he clearly was going into this series. I wonder if Darling asked, "Where are the YankCKKCKees? I thought this was gawnna be the RED SocKCKCKs and the YankCKCKees? Tampa Bay has a team?"

When Buck Martinez is the guy carrying your broadcasts, you're in bad shape. Sometimes folks complain about the bias of the hometown broadcasters, or the way they overrate "grinders" and get hard-ons for dudes that probably shouldn't even be on the team, but I'll take that over the incompetence of a national broadcaster that's calling something he doesn't know very well.

One other thing: for those that believe the playoffs are about "manufacturing" runs and "large" ball doesn't come into play, a recap of the scoring: 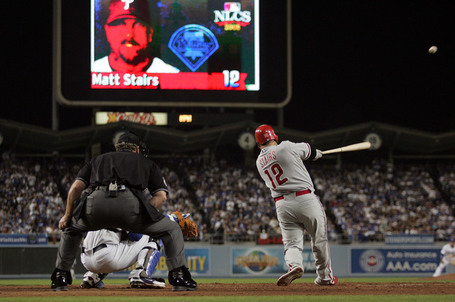 You know, outside of Chad Billinsgley's horrible outing, the Dodgers haven't really played bad ball this series. They're just getting beaten by the Phillies, a team that remains underrated and has a serious shot at winning the World Series.

The Dodgers took a 5-3 lead into the top of the eighth in game four, when Shane Victorino hit a two-run homer to tie it up.

A few moments later, wih Ryan Madson due up, Fat Matt Stairs grabbed a bat and waddled out of the dugout into the Los Angeles night. He took a Jonathan Broxton fastball and sent it flying out into that same Los Angeles night, putting Philly up 7-5. J.C. Romero and Brad Lidge closed it out, and the Phillies moved to within one game of the World Series.

Matt Stairs is 40 years old. He has long been seen as a guy who had the body of a beer league softballer. Coming into 2008, he had 10 post-season at-bats in his career; one in 1995 with Boston, nine in 2000 with the A's. He put together a couple good years in Oakland as a starter, but has mostly been a lefty thumper. Have bat, will travel.

The Phillies got him from Toronto earlier this year. Before landing with the Jays, he had played for, in order, Montreal, Boston, Oakland, the Cubs, Milwaukee, Pittsburgh, Kansas City, Texas and Detroit. Wherever there was losing to be done, Matt Stairs came along for the ride and tried to help when his number got called. In 2006, he played for the Royals, Rangers, and eventual AL champions Detroit, though he did not play in the postseason, so big whoop.

To be a major part of what looks like an inevitable NLCS win, even if just for this one pinch-hit at-bat, has got to be enormous for him. He's toiled, done his job, and played wherever he could for 16 years. Good for Matt Stairs.

Bad for the Dodgers.