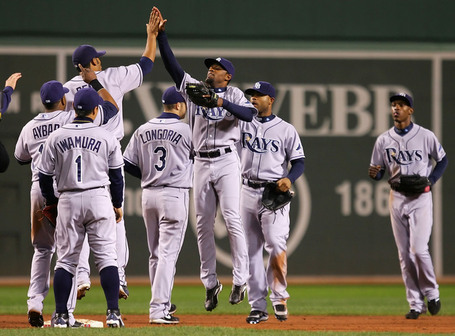 Tampa Bay is smoking Boston. It's over, man. I know the Yankees blew a 3-0 lead in 2004, and I know the Indians were up 3-1 last year. But 22-5 in the last two games? A team with a deep bullpen that's killing everything?

Ain't happenin'. The Rays are going to go to the World Series.

OK, I don't want to go that far. Buster Olney was on SportsCenter this morning and pointed out the biggest thing: if Matsuzaka and Beckett can win a couple games (no amazing feat to win two straight and tie it up), the pressure is ALL on Tampa Bay in a theoretical game seven. And then who knows what's what?

But the Rays are looking not just good, but dominant. And not purely dominant, but like they just plain have Boston's number. As Macho Man Randy Savage once said to Kevin Nash, "I've got your number in life and your number is zero." He also once remarked, "You need to get the hell out of Dodge because I own Dodge."

The Macho Man is cool.