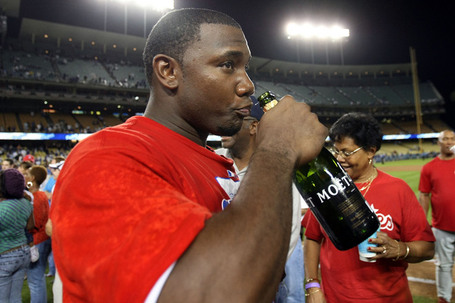 Congratulations, Philadelphia. Not only are you the city of the funniest show on TV, but your Phillies are the 2008 National League Champions, and they've done it by simply beating out good teams all year.

They beat out the Mets to win the NL East, they beat (a banged-up, yes) Brewers team in the NLDS, and they outplayed a strong Dodger team on a hell of a run in the NLCS to win in five games.

Cole Hamels won the NLCS MVP award, and deservedly so, but Shane Victorino was probably the breakout player of the series. He's earning himself a lot of fans this postseason, and I'm one of them.

It's the first Phillies World Series appearance since 1993, of course, the year Mitch Williams served one up to Joe Carter. They've had numerous disappointments since then, and finally, they have surpassed expectations instead of falling short of them. The Phillies are going to the World Series.

Big up to the Los Angeles Dodgers, too. Their manhandling of the heavily-favored Cubs was near-unforgettable but for how brief it was, and they played hard this series. I still say they didn't play poorly save for Billingsley, but they just weren't good enough. Manny Ramirez alone can't do it all. Not even Manny Ramirez and pitching can do it all in the playoffs.

It seemed somewhat fitting to me that Nomar Garicaparra, who has floated around, losing, his entire career, made the final out, but even more fitting was that with a 5-1 deficit and Nomar at the plate with a man on, even Nomar getting on meant little, as the Dodgers were down to Juan Pierre in the on-deck circle. If only Andruw Jones could've come up and struck out to end it.

Dodger Stadium played this track as soon as it all ended, which I thought was classy and deserving of their team's battle to emerge from a crap division and become a good team when it counted. They were a poorly-constructed team, honestly, but filled their ranks well enough to make it this far. Jones and Pierre will continue to haunt the checkbook, and Manny may never wear Dodger blue again, and guys like Kent and Maddux should probably retire, but they worked hard. Even Tommy LaSorda could appreciate the "try hard" factor of these guys.

Corny? Sentimental? Sure. But it's a sentimental game.