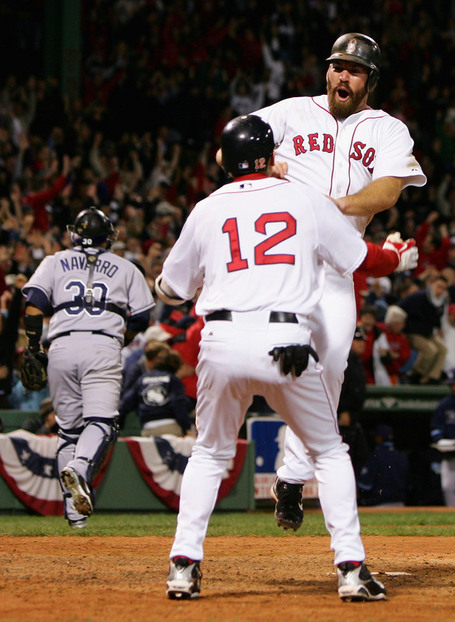 Do not go gentle into that good night,
Old age should burn and rave at close of day;
Rage, rage against the dying of the light.
-- Dylan Thomas

I am as much a hater of TV buzz talk as anyone, probably moreso than most. I hate "knowing how to win" and "grit" unless it's John Wayne charging at Robert Duvall.

But if you don't think this game could play a major, major role in the psyche of the Tampa Bay Rays, then you've just plain not watched baseball things happen before.

I'm rooting for Tampa Bay, too, but I don't care how much you hate Boston -- give them some props for this. Down 7-0, getting totally dominated by a team that had blown them out in two straight games, their backs against the wall. It was all but over, just like last year against Cleveland, just like 2004 against the Yankees.

This is not a team that plans to go down without a big-time fight, and right now, they have momentum. They changed that game seemingly at will. The Fenway Faithful roared back into lively form.

Sure, they're going to St. Pete now. But they've been here before. They're the team to beat, the defending World Champions.

...is Tampa Bay going to be able to pull it together?

I hope so. But I'd be lying if I said I didn't have my doubts.

And beyond all that, what a game. What a classic of a game. Absolutely amazing.