Share All sharing options for: Unbiased Postseason Recap: Day One

I love the playoffs, no matter that we'll never be involved, ever, ever again. It's hopeless. Give it up! FUHGEDDABOUDIT!

In order to contribute my bit of genius to the SB Nation postseason coverage, I'm going to do daily recaps of the games. It will be exciting for everyone. 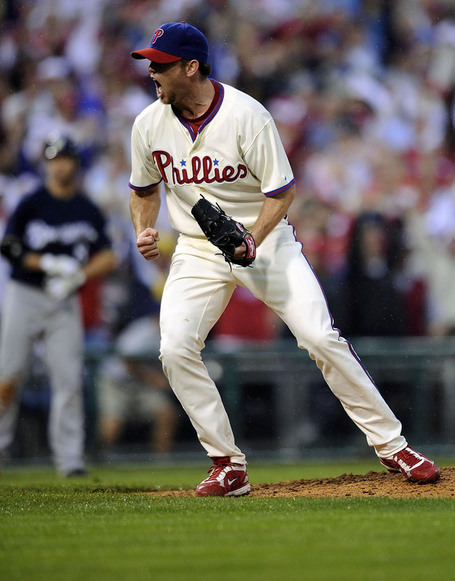 Young Brewers starter Yovani Gallardo threw 75 pitches over four innings of work, and struggled through the outing, walking five and giving up three earned. The Brewer bullpen kept them in the game, which is pretty good news for them with Ben Sheets out and Sabathia risking running out of gas for the second straight postseason thanks to being worked to death on the way in.

Milwaukee did make it interesting in the ninth, testing battle-hardened Phillies closer Brad Lidge, scoring one run off of him and threatening with two runners in scoring position for Corey Hart. Lidge struck Hart out to end the game and preserve the win, giving Philly a 1-0 series lead, which is, of course, a big deal.

I picked Milwaukee to win this series but I think it's more that I want them to. I like their team. But with Sheets out and down 1-0, I can't see them winning it if I'm totally honest. They're an important man down and that's not easy to overcome. I'm full of genuine insight, huh?

The big thing for Philadelphia was not only did they get a great start out of Hamels and the win thanks to him, but they kept the bullpen rested, although Lidge did throw 35 pitches (19 strikes).

Chase Utley had two RBI, and Ryan Howard walked three times. He also made a hell of a defensive play at first base, grabbing an awkward one-hopper off the bat of Prince Fielder. They then sumo raced to first base. Howard won. This was the Phillies' first postseason win since 1993, when they beat the Blue Jays in game five of the World Series. 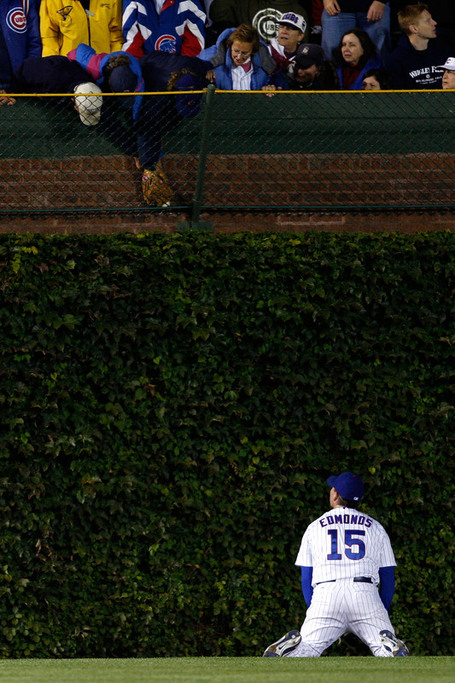 The Cubs went 97-64 and were only briefly seriously challenged for the NL Central division title, their second division crown in a row. But just like last year when they crapped out in the NLDS against a so-so NL West champ (I know the D'backs had a nice record, but it was a mirage), you can just feel the Cubs choke job coming on.

Like I've said before, I have a soft spot for the Cubs, both geographically and because I've watched a ton of Cubs games in my day. But I can't help but just chuckle at their misfortune at this point. They haven't been TO a World Series since 1945. There's no reason they should not win the National League this year. Of course there was no reason they didn't win in 1984, either.

(As a side note, they never talk about 1989, do they? No black cats or Steve Garvey or Bart Man, just a thumping. Let's hear that dork Dennis Farina narrate that one.)

And here was game one, at the Friendly Confines, with a crowd full of fans that have had a certain swagger this season. Not, "Boy I hope we win!" It's been, "We're going to win because we have the best team."

Grand slam James Loney, 4-2 Dodgers, and they never looked back. Manny Ramirez took a wicked curveball and put it into the seats, and Russell Martin tacked on another homer. Dodgers 7, Cubs 2. Cubs in the hole. And we've seen how the Cubs respond to adversity.

Ryan Dempster might as well have literally taken a dump on the mound, walking seven in four and two-thirds, taking the loss and giving up four.

I did find it hilariously stupid when play-by-play man Dick Stockton asked, "Have you ever heard Wrigley Field this quiet?" As if we're talking about more than a quaint little ballpark that has stood the test of time (sort of) and has been the home of an endlessly bad team that even manages to stink when they're good. Like we're talking about Yankee Stadium or something. Come on, Dick. 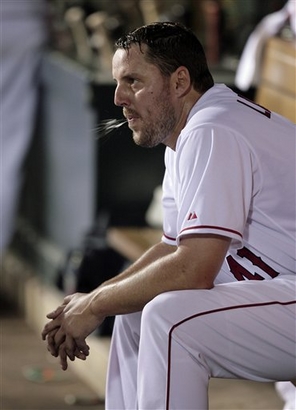 Just when you (maybe you, not me, really) think the Red Sox aren't a serious threat, here they come, shutting down the Angels and making some good things happen against John Lackey, who didn't pitch a bad game.

Jon Lester pitched a hell of a game, going seven and striking out seven. The run he allowed was unearned. Papelbon got the save.

Jason Bay hit a two-run homer to give Boston the lead, and they never looked back, tacking on two more in the top of the ninth to give themselves and Papelbon some breathing room. Not that he really needs it. Chip Caray gave a pretty amazing stat in the ninth: the Angels active roster came into the game 1-for-38 against Papelbon. They did get a hit off of him.

I'm thinking the AL champion comes out of this division, because the Rays' amazing season has turned them into a mildly overrated team. They're good, but they're not really any better than the other three AL teams. But it'll be interesting to see develop. Anything can happen! There's only one October!

At some point, I'm going to want to kill Frank Caliendo. Ha, ha, ha, I get it, they make reference to how many FrankTV commercials there are. That makes me less already f-ing sick of it! No. Maybe it'd be better if Al Pacino was a little fat guy, but that's the real problem with Frank's impressions. And his McCain is atrocious.

Craig Sager's suits genuinely need to be explained at some point. I also don't think he knows who the players are. Stick to basketball, Craig.

You too, Ernie Johnson.

I don't say much bad about Cal Ripken, but he adds nothing to the studio team. The best guy in that booth today was Curtis Granderson. Someday, he and Bill Hall are going to be on Baseball Tonight, and hopefully by then they won't be as awful as Kruk, Eduardo Perez or Eric Young.

Mitch Williams is still a bum.