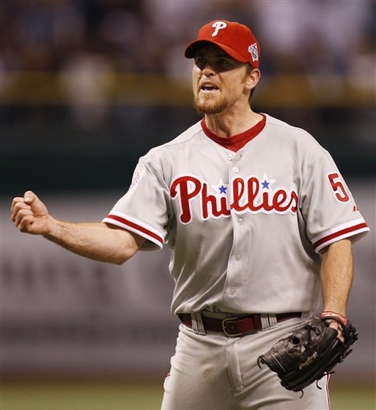 Bet that song gets stuck in your head for a couple days if you let it play.

How about a little respect for the Philadelphia Phillies? Too many people, in my estimation, share this dream of the American League dominating the field of play, when all that really matters when considering this is the World Series, not the ridiculous All-Star Game or the continual bore that is interleague play. Wow, Jeremy Guthrie batting! Hey, the Subway Series, that isn't played out yet.

The Phillies can play, is what I'm saying. Cole Hamels was outstanding again (7 IP, 2 ER, 2 BB, 5 K) and I think we can say that the echoes of doom are long forgotten when it comes to Brad Lidge in the ninth inning. He's got a 1.08 ERA this postseason, giving up one earned against Milwaukee in game one of the NLDS when the Phils had a 3-0 lead.

This was a hell of a game, and I expect this series to be filled with close games, no matter who wins or how far it goes.

Now, to favor the Rays, this one's obvious: someone on the Philadelphia staff's gotta step up. They beat Scott Kazmir, and coming behind Kazmir are James Shields and Matt Garza. The Phillies are countering those two with Brett Myers in game two against Shields, and Jamie Moyer against Garza in game three. Moyer looks cooked so far in the postseason. I don't know how the Phillies aren't bumping up Joe Blanton to counter Garza and hoping that Blanton can turn it up some, because Moyer has been awful. Risking another bad outing against Garza, the ALCS MVP, is pretty foolish, if you ask me.

Game one lost or not, the Rays are very much in it, because their starters say they're in it. Hey, a couple more hits and they win game one anyway. The Phillies let a lot of opportunities to blow it open go by.