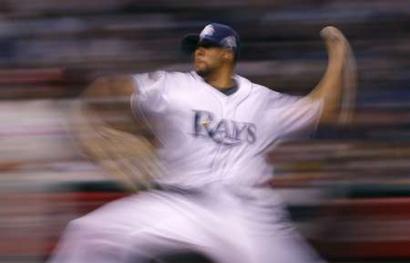 That whirling dervish to your right is Vanderbilt phenom David Price, who overcame some rough spots to punch out the Phillies and secure a game two win for Tampa Bay, evening up the series at one apiece.

The song above is the main theme from Rudy, one of my very favorite movies ever made, and my favorite movie soundtrack, period. Jerry Goldsmith captured football and autumn sounds, welding them together in such a way as to make a grown man tear up on his 500th viewing of the movie. You can't beat that. It was playing either on FOX or in the stadium before the game tonight, and I can't get it out of my head. I watched Rudy again the other day, actually. It still got me. With his dad and brother clapping in the stands. Fat Jon Favreau going wild. Vince Vaughn redeeming himself. Oh man.

The Phillies threatened late and looked like they might bounce back into it with the big hitters coming up, but no dice. So it's all even steven heading to Philadelphia for game three on Saturday night.

Buck and McCarver about tripped over each other in the rush to smooch James Shields, but the dude went 5 2/3 innings. He did his job and handed it over to the pen and they held it down, but forgive me if I don't crap my pants about it.

Home plate umpire Kerwin Danley should be removed from the World Series, as he ridiculously blew two calls. The first one was Delaney calling a check swing third strike on Rocco Baldelli on a full count, then checking down to first AFTER making the call himself. First base umpire Fieldin Culbreth (who are these nerdy named weirdos that become Major League umpires?) said no swing, and Baldelli was awarded first base. Terrible for a JV game, let alone the World Series.

In the ninth, Jimmy Rollins' jersey was clearly clipped by a David Price pitch, and as Rollins started making his way to first, Delaney called a ball. You could hear it, you could see it, and there was no doubt about it. The ball hit his jersey.

Get a pair of glasses, Kerwin. Or a new job. However, I do like that he strongly resembles John Beasley, who you may know from many movies or TV pro-grums, but a man I will never see as anything other than one of three characters:

1. Chris Vaughn, Sr., from the insane remake of Walking Tall.

2. The father of Terry and Jesse in The Mighty Ducks. (Where did Terry go after the first movie?) 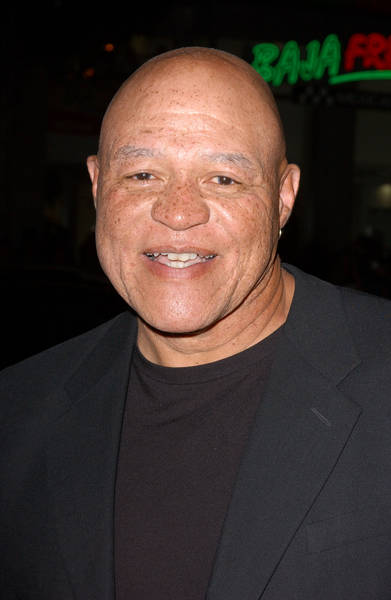 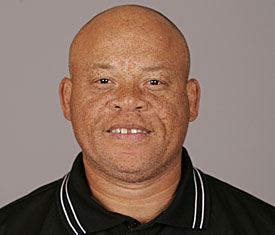