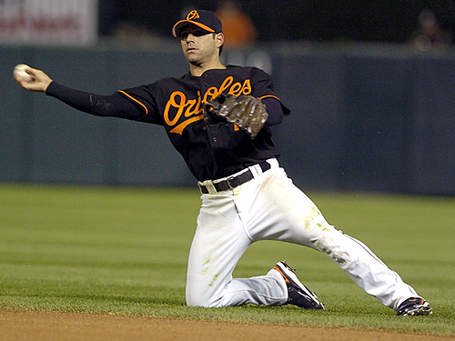 When I originally put together the 40 Greatest Orioles last back in 2006, I knew things would change pretty much every year. Last December, Jeff Conine fell off, Brian Roberts came in, and with the end of his Orioles career, Miguel Tejada was easier to put into perspective, and he jumped up to No. 23.

Another season has gone by, and there are a couple more changes to be made.

Mora moves up one spot to No. 28 on the strength of a surprisingly good season at age 36, but jumping Scotty McGregor won't be easy. Actually, really, Mora could have gotten a little higher if not for the fact that his 2008 season is so easy to pick apart; the man had a couple of remarkably hot months. It all adds up the same, but he was a total detriment to the team for the entire first half. He was awful.

Roberts came on at No. 39 last year, and with another strong season leapfrogs a bunch of dudes to climb up to No. 34. He had his second-best season in 2008, trailing only his phenomenal 2005, which he will not ever repeat. He's really a hell of a player. How much higher he can climb depends on how long he stays with the team. At 30, some are worried about his aging, but I'm really not. Speed guys age well, as do plate discipline guys. Roberts has both.

...and what about Nick Markakis?

Young Markakis is already knocking, hard, on the door of this list. He put together an excellent season at age 24, and has made a career (MLB and minors) of surpassing expectations. Maybe we're going a bit crazy about him; he's not Mickey Mantle or anything. But he is a damn fine ballplayer, and unless he gets hurt or goes into a wildly massive funk in 2009, he'll be on this list next year. Sorry, Otter! Actually, next year might be a decent time to extend it to 50, so that Olson and Conine can stick around, and maybe, I dunno, Mike "Blanche" Devereaux or someone gets to make an appearance. If Huff had another big year in '09 he could make the top 50.

Actually, since it's a total off-day, let's talk some more about Markakis. B-R.com lists these ten men as his most similar hitters through age 24:

Ben Grieve was the 1998 AL Rookie of the Year, made the All-Star team that year, and had a couple more good seasons before falling right apart. At age 25, he flat-out lost his power, with his slugging percentage dropping 100 points. That was his first season with Tampa Bay, part of the three-team deal that sent Johnny Damon to Oakland. Grieve's career never recovered, and he fell out of the majors after the 2005 season at age 29.

Ellis Valentine was a 6'4" right fielder with the Expos in the late 70s with decent power and bad on-base skills. He was having his best season at age 25, but he played in only 86 games. He was never a regular again.

Enos Slaughter is in the Hall of Fame, and was a really good player for about 15 years, then held on playing until he was 43.

Vernon Wells is currently one of the most overpaid players in the game. Maybe only Gary Matthews is more overpaid, pound-for-pound. Wells had a good 2008, but only played in 108 games, so really how good can it be? He was God awful in 2007. Wells' best season came at age 24 (so far).

Carlos Beltran is another highly-paid center fielder, but outside of one rough year (his first with the Mets in 2005) he's earned his keep. He's a fantastic player.

Chet Lemon was a damn good hitter, part of the great '84 Tigers. He made three All-Star teams. He also got hit by a lot of pitches.

Steve Kemp was the No. 1 pick of the 1976 draft, and debuted in the majors in 1977. The USC Trojan made a fine accounting of himself immediately, and made the 1979 All-Star team. He was inconsistent, but when he played, he hit. He missed all of 1987, then came back in 1988 with his fifth team, the Rangers. He played 16 games and that was that. An unremarkable career, but not a bad player.

Ellis Burks had two-and-a-half really good seasons in Boston (1988-1990, ages 23-25), but got hurt a lot. He was out of Boston after '92, and played one year with the White Sox in 1993. He signed with the Rockies for 1994, and played only 42 games in the strike-shortened season, but Colorado and Coors Field revitalized his career. He killed the ball in those 42 games, and had a monster season in 1996. He was traded to the Giants in 1998, and had four more really good years in San Francisco and Cleveland. He finished it out in 2004, returning to Boston and playing 55 games.

Kent Hrbek was fat, a career Twin, and hit his ass off for 14 seasons. I always saw him as sort of the yin to Kirby Puckett's yang.