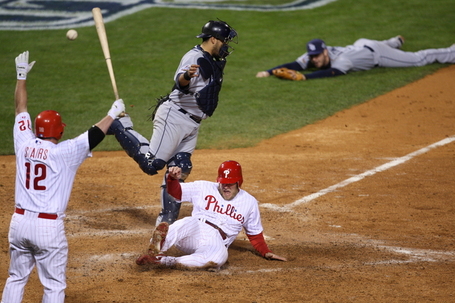 I have nothing against the Rays, but part of me is taking great joy in watching the Phillies fail to roll over and die for the mighty American League champions, sure winners of the World Series due to the American League's dominance of the All-Star game, and imagining fellows and ladies like our own Titov -- no offense, Titov -- pulling their hair out in frustration about another evil plot hatched by Bud Selig, master genius (????).

Maybe if Evan Longoria could throw a ball...

How about some props to Jamie Moyer? This guy was born under the all too brief Presidency of John Fitzgerald Kennedy (on the same exact day as Kirk Hammett, in case you care) and he was so utterly awful in his previous 2008 postseason starts that you'd have been right to question whether or not the Phils should even put him out there. But he did a fine job against the glorious and epic Tampa Bay lineup, going six and a third and allowing three earned, with five strikeouts and a walk. Matt Garza pitched fine for Tampa, too.

Needless to say, any walkoff World Series game is a good one. This has been a damn good series so far. Too bad these lame umpires have barely showed up for work.