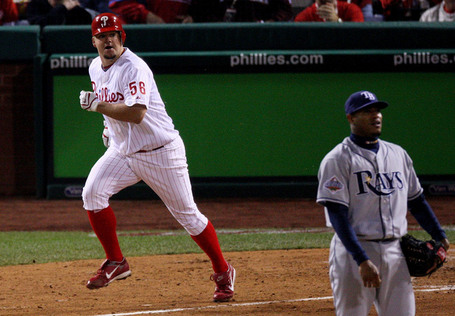 No matter how this winds up shaking out, the Tampa Bay Rays had a fantastic season and have nothing to be ashamed of. Not only are they the Rays first World Series team, or first playoff team, but they're the first Rays team that has sniffed competitive stature. Every guy on that team has a lot to be proud of.

Right now, though, the Phillies are outclassing them. When Joe Blanton came up with the bases loaded, I said that if he went yard, Taco Bell owed me a franchise. Our own exitfare said that was like getting the squirts for life -- yeah, well.

Blanton did nothing in that spot, but did hit a solo shot later. Nothing like helping your own cause.

Thing is, if I'd asked 100 of you to pick the World Series in April, zero of you (including me) would have said Rays v. Phillies. Oriole death aside, we've been treated to a neat season and a heck of a World Series, even though Philly's up 3-1 and took game four without much work. I can take that, even if it means we stink again. Hey, someday...

Tampa Bay, still, gives me hope for Andy MacPhail and the O's. The big boys are not unbreakable. If Tampa Bay can be here, so can we.

But right now, the Phillies are playing their butts off and look like they're en route to their first World Series championship since 1980. Stranger things have happened, but rarely.