Another day, another chumpfest in Chicago. Just get it over with, Cubbies. Spare us all. 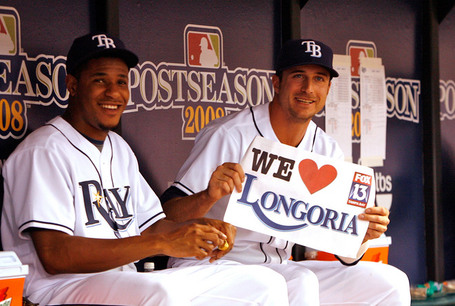 If Evan Longoria turns out to be as good as some people think, we'll one day talk about Longoria in hushed tones, recounting his remarkable and sudden rise to the upper echelon of Major League third basemen, putting the Tampa Bay or Wherever Rays on the map, hitting a 421-foot home run on the first postseason pitch he ever saw, giving Tampa Bay an early lead.

Of course, the White Sox stormed back in the top of the next inning to go up 3-1 on a DeWayne Wise, and then in the bottom of that same inning, the Rays tied it up, and Longoria came to the plate again.

Bam, another homer. The early portions of The Legend of Evan Longoria are being written.

Javier Vazquez (4.1 IP, 8 H, 6 ER, BB, 6 K) did not have it today, but Clayton Richard saved the White Sox bullpen with three and a third innings of shutout relief. So it's not all doom and gloom for Chicago just yet. With Mark Buehrle up against Scott Kazmir in game two, they're hardly out of it.

My favorite part of this game might have been the commentators acting as if the stadium was a special sort of loud. It was fairly loud, given the big crowd and the playoffs, but they acted as if I'd never seen a playoff game before, or one in a dome. The Metrodome, dump that it is, has been way louder than the Trop was this afternoon. They need a new stadium.

But they're winners, so hey. 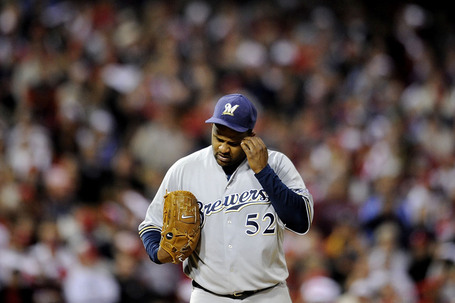 A lonely sort of night for big, fat CC Sabathia, who threw 98 pitches in three and two-thirds innings and was just straight up ugly out there. The big damage shot came from the bat of Shane Victorino, who dropped a grand slam in a five-run second inning for Philadelphia.

Is this really any surprise? Sabathia has been run ragged recently -- this was his fourth straight start on three days' rest. That's rough, man. That's just not going to work out.

I don't know if I even would have risked throwing him today. I know Sabathia will say he wanted the ball, because why wouldn't he say that? But Dale Sveum, I think, should've risked sending perfectly competent Dave Bush out there today to give Sabathia rest and time to get ready for game three. I know it's not ideal, but "ideal" is not the hand the Brewers have been dealt.

If it was me, I would've gone with Bush. It's not as if Bush is a bad pitcher, and even if he was, bad pitchers have won playoff games before. Derek Lowe once stepped up big in a terrible season for him. Running Sabathia out there today was essentially a suicide mission. Now they NEED Dave Bush to SAVE them. Hey, OK, man.

The Brewers are doomed. 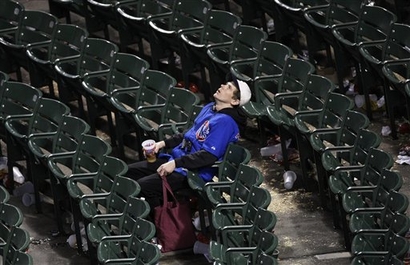 To get away from the humor I'm finding in the Cubs just absolutely tanking this series, I would be remiss if I didn't note how sad it must be for their fans. To me, it's just hilarious ineptitude, and another time to note that even when the Cubs are good, they manage to stink.

These fans, as I've said before, had swagger this year. They were THE team in the National League. They knew it. Everyone knew it. This was their year. They were built right, made a great mid-season pickup with Rich Harden, got some help from a seemingly washed-up Jim Edmonds. For once, it seemed like things were just...right for the Cubs. The stars were aligned. At the very least, a new National League pennant would go up at the corner of Addison and Clark.

This is not to slight the Los Angeles Dodgers. With Manny Ramirez killing everything thrown to him (he went yard again) and a damn good pitching staff, the Dodgers are really good for a team that finished 84-78. They are better than their final record might lead you to believe on the surface.

But come on. The Cubs won 97 games. They were by far the best team in the National League. And now they've been outscored 17-5 in the first two games of the playoffs. These games have not been competitive or heartbreaking -- they've been massacres.

Chicago went down 7-0 today before scratching a run across, and were down 10-1 going into the bottom of the ninth, when they threatened to create some magic but instead just decided to be the Cubs, with Jonathan Broxton striking out Kosuke Fukudome and Daryle Ward, both looking.

After the game, Lou Piniella addressed the Fukudome issue, saying he's done playing him. I don't think Lou was TRYING to be mean, but he was very blunt. "I'm gonna play Fontenot or Reed Johnson or somebody, and that's the end of that story." Fukudome went 0-for-4 with three strikeouts. More upsetting is that he's not very good, period, and has stunk for months.

So now it's up to Harden to save them as they head to Los Angeles. Maybe the most amazingly great thing would be for them to win two games out there, then come back to Wrigley to blow it.

The alternating, annoying voices of Tony Gwynn and Ron Darling are starting to get to me.

Today was the day I reached the point of wanting to kill Frank Caliendo.

I am really sick of hearing about Aaron Rodgers as relates to Brett Favre's streak.