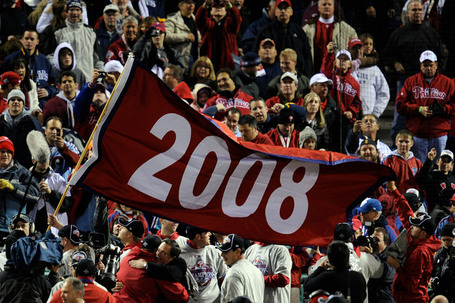 Hats off to the Tampa Bay Rays, too, one of the best stories in recent years. Going worst-to-first is always an accomplishment, and the only thing that stopped them from winning the whole damn thing was a red-hot team that outplayed them over five games.

Quite a baseball season. It was the first since I've been genuinely aware of the sport that did not have a single pitch thrown by Roger Clemens, and it was also the first that didn't have a single at-bat from Barry Bonds. Bigger fish than Rafael Palmeiro, yes, but I got the feeling in the spring that when it came right down to it, baseball would move on without missing these guys. We did. If I never hear another word of either of them again (I will, of course), I'd be OK with it.

This was the first postseason since 1993 where the Yankees didn't make an appearance. The final season of Yankee Stadium and Shea Stadium. Another October of heartbreak for Cubs fans. Manny Ramirez going bananas in Dodger blue.

New faces and new stars. A new flavor of "great manager" came along by the name of Joe Maddon. A lot of Shane Victorino jerseys are about to pop up along the east coast.

And so another season closes. The Orioles stunk again, but it was a different stink, at least, and there's the hope, however faint right now, that this will all be coming to an end under the MacPhail regime. We weren't treated to the best baseball, but I know that I had some genuine fun watching our boys this year, and I haven't said that outside of the first half of 2005 in quite a while.

This was our fourth season here at Camden Chat, and I want to again thank everyone that has helped make this site what it is. I want to thank zknower, Stacey, duck and 2632 for their help, plus everyone else that has contributed.

As always, I say goodbye to baseball with the familiar, beautiful words of A. Bartlett Giamatti:

"It breaks your heart. It is designed to break your heart. The game begins in the spring when everything else begins again, and it blossoms in the summer, filling the afternoons and evenings, and then as soon as the chill rains come, it stops and leaves you to face the fall alone."