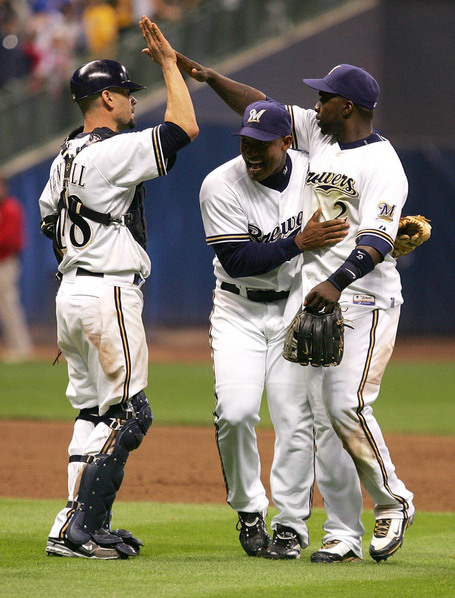 Maybe Milwaukee doesn't win this series. Maybe they lose today and it's over. But at least they're going down fighting at home. Closer Salomon Torres damn near tanked the Brew Crew's 4-1 win yesterday, giving up three hits in the ninth, but he got out of it and everyone celebrated good times. Come on.

Dave Bush went 5.1 for the win, giving up one earned on five hits with no walks and three strikeouts. Milwaukee won on 11 hits -- all singles -- and five walks. Mike Cameron was 1-for-2 with two walks and two runs scored, and J.J. Hardy had three hits. Jason Kendall and Bill Hall had a couple singles apiece. Milwaukee jumped out to a 2-0 lead in the first and never looked back.

If nothing else, Milwaukee's long-suffering fans (again, no playoffs the last 26 years, and those were mostly really bad teams) get a postseason win. Now they rest their hopes on the ragged arm of Jeff Soup Pan, and hope that yesterday's offensive awakening, if you will, will become something bigger that includes home runs instead of just singles and walks. Nothin' wrong with singles and walks, but who doesn't like a home run? Sayonara homerama!

The Brewers haven't won a game this big since...beating Illidan in college...

And hey, at least if nothing else, they've out-done the other NL Central team. 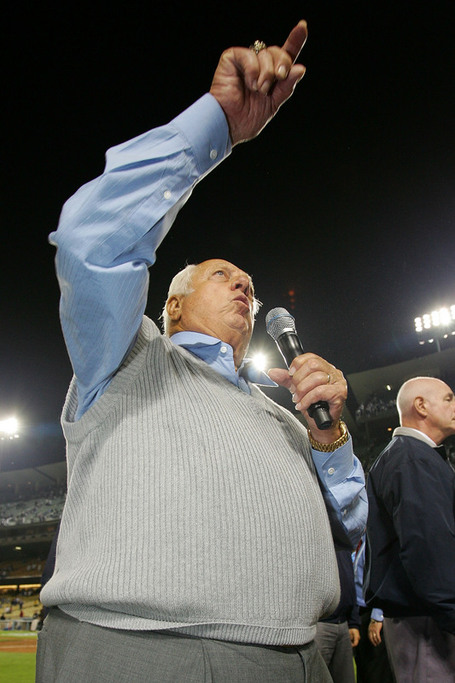 I'm going to start this by saying that the Cubs should really do their fans a favor and resume sucking all season long instead of waiting until October to take a big, Cubbie dump. That way they won't have wasted everyone's time, and Old Style won't be available in limited quantities in the city of Chicago.

There is literally no excusing the Cubs not winning the National League pennant this season. I don't want to hear about stupid curses and lame excuses as to why this happened. It happened because their players choked.

AND, since no one else wants to talk about it, it happened because the Dodgers flat-out out-played them for three games. Los Angeles is not a bad team. As much as I want to give the Cubs guff for losing a series they should have won, they did not lose to some awful team. The Dodgers are better than their record. If they'd had Manny Ramirez all year they probably win 90 games. That was some super trade.

Since winning the 1988 World Series and prior to this season, the Dodgers had gone 1-12 in postseason play. This is the deepest they've been in the playoffs since 1988, well before the playoff expansion.

I think it would be kind of neat if the Dodgers made a real run. I like Joe Torre. I like a lot of their players, in fact. The only thing that irks me about their current run and good chance at winning the NL is the fact that this means a team can sign someone as bad as Juan Pierre and someone as horrific as Andruw Jones and get away with it without doing anything crazy. Trading some guys for Manny Ramirez isn't crazy, it's a move a pretender makes to become a contender. I'm sure Bill Plaschke is living it up, another thing that bothers me.