One team of Socks fails to put it away, another stays alive, and some squadron from Illadelphia heads to the National's League Champion Series. 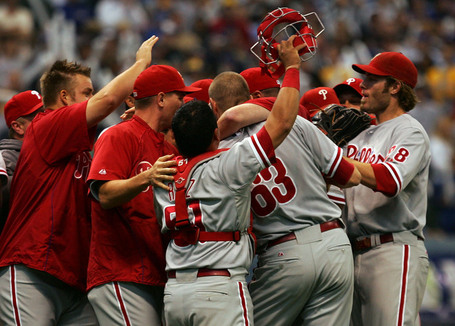 I maintain that Joe Blanton is an ugly SOB, but with six excellent innings (5 H, 1 ER, 0 BB, 7 K), he's the ugly SOB that pitches the Philadelphia Phillies into their first LCS since 1993, where they will meet the Dodgers, who haven't been this far since 1988.

With the way the Cubs dominated NL headlines all season, and with far, far too much attention paid to the New York Mets and their "struggles," plus the "are they or aren't they?" story of Milwaukee and the laughable atrocity that was the National League West prior to the arrival of Manny Ramirez: Game Changer, the Philadelphia Phillies got no attention this year. All they did was play good ball, go 92-70, win the NL East for the second straight year, and now they pretty definitively beat the crap out of the Brewers. It was no Dodger Blue smacking of Cubbie Blue square in the mouth, sending the North Side legions into their holes for the rest of the winter, but they did rather beat the crap out of Milwaukee overall.

The Phillies are a really good team, and I love the NLCS matchup. I may hate the Phillies due to my instinctive nature of hating all things Philadelphia sports (except the hilarious and dedicated fans of every crummy team in the city), but it's a nice-looking series on paper if you ask me.

The NL shook out this year to four teams, who have all had pretty decent World Series droughts. The Cubs, of course, haven't been there since 1945 and haven't won one since 1908. The Brewers join them in the "still waiting" pile, having only even been to the World Series once, a seven-game loss to the Cardinals in 1982, the year of my great birth. And now you have the Dodgers, who haven't gone since they upset the A's in 1988 (a long time in Dodger standards), and the Phillies, who haven't been there since '93 and haven't won since 1980.

So either the Phillies or Dodgers will represent the National League in the World Series, and anyone that thinks neither team has a real shot at winning the whole shebang is kidding themselves into AL superiority. These are good teams with good players. Only a Brad Lidge collapse enters my mind, say if someone hits another moonshot off of him. 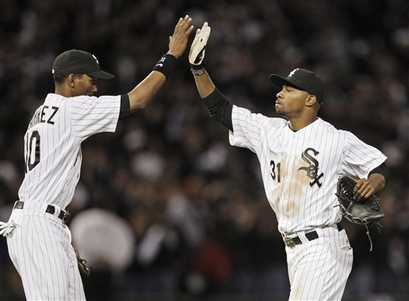 Can I get something off of my chest? I'm really tired of Joe Maddon's fashion glasses. There, I said it. I feel a lot better.

I wonder how time will remember Joe Maddon should this year's Rays turn into an abberation. I'm not saying they don't have a TON of good reasons to feel super awesome about the future down in St. Pete, but, y'know, things happen in baseball. Young players don't always turn into the monsters they're expected to be, even with good early results. Evan Longoria could Hank Blalock it up. Pitchers blow out their arms all the time. And any team that just did a +31 in wins from one year to the next can expect some pains along the way after, because it's not easy to win 97 games in one year, let alone do it consistently. This season was a MASSIVE turnaround. I guess the Rays could turn into the 1991-2005 Braves, but I have my doubts.

I wonder this in part because it wasn't but 2005, a whole three years ago, that Ozzie Guillen was in his second year of managing the White Sox, and was deemed some sort of genius or wizard because Chicago did a +16 that year, going 99-63, sweeping the Astros to win their first World Series in a dog's age. The year after that, they went 90-72 in a tough division, finishing third, and then dipped all the way down to 72-90 last year. Ozzie remained the war chief of the South Side; some called for his head. This year, he proves again that you can win when your team performs well.

I guess all I'm really trying to say is let's not be quick to anoint Joe Maddon the Manager of the Decade award based on this season. Now that there are genuine expectations, the seat gets warmer and warmer. It can remain pleasantly toasty should you keep winning, but start losing a little and that thing can go up in flames before you can remember where you put that plaque they gave you. 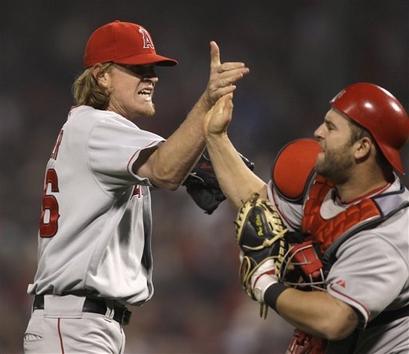 Though K-Rod threatened to choke another one away, the Angels managed to scrape out a 5-4 win in 12 long innings that stretched too far into the night for my tastes, and Jered Weaver and Erick Aybar wound up momentary heroes. Of course the Angels are still one game away from elimination, but you gotta take 'em one at a time. You know what I mean? Just trying to help the ballclub.

Worrisome for Boston is that Josh Beckett looked well shy of 100%, but did gut out five innings for them. The Angels had a lot of chances to put this one away, racking up 16 hits to Boston's scattered seven, but they kept trying to lose to the Red Sox. You can't blame them for that, really. It's like getting mad at a pen for getting ink on your paper. That's what it's designed for.

I was listening to Chicago sports radio yesterday and a troubled Cubs fan called in and wondered why the division series aren't seven games like the rest of the playoffs. It's a valid thought, but another one was the reply the host gave: "Do you really think it would have mattered?"

I said the other day that I'd like to see Ryan Howard and Prince Fielder sumo wrestle. I think the winner should face the winner of a Jonathan Broxton-Bobby Jenks match. Fat guys are cool. There is no denying it.

I hate the NFL.