So it's settled. Only two steps left until we crown the 2008 champions. 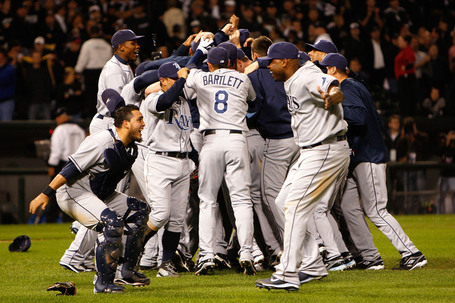 Can you believe it?!?!?! The Tampa Bay Rays are really heading to the World Series, having laid waste to the White Sox in four games, celebrating on the field on the south side of Chicago.

One thing I'm getting tired of hearing is how the Rays "act like they belong" in the postseason. What's the opposite of acting like you belong? The Cubs? The Brewers? The White Sox? The Angels? The teams that lost to other playoff teams?

Any team that makes it belongs. 162 games are hard. Going .500 is hard, let alone a little or a lot over, and Tampa Bay was a lot over. Let's not keep acting all surprised that this team is good. They jumped on Gavin Floyd fast, chasing him after a little over three innings of work, and had this baby all but sewn up in the fifth inning when they went up 5-1. B.J. Upton hit a home run in the first and another in the third, and Carlos Pena went 3-for-4 to cap off a great LDS where he hit .500.

They got enough out of their starter, Andy Sonnanstine, and went to J.P. Howell and the red-hot Grant Balfour to finish the final three and a third.

They're good. They're really, really good. They "belonged" by July. 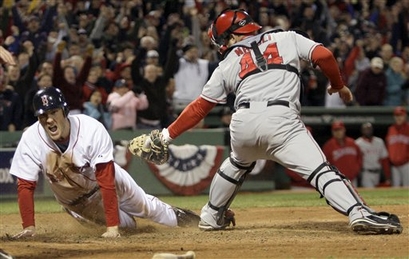 Boston was having their way again, up 2-0 in the eighth, but the Angels came back, showing a lot of grit, and they tied the game at two. Then Mike Scioscia got all Mike Scioscia, and a blowing of the fundamentals screwed the Angels over. Why go into great detail? You saw it.

Bottom of the ninth, Jed Lowrie singles, Jason Bay comes around to score, safe, Boston goes to their fourth ALCS in the last six years.

While Boston fans celebrate this tremendous achievement as though it's the first time it's ever happened, Angels fans whine about not whining, oblivious to the load the rest of the baseball world is supposed to accept about Mike Scioscia and The Right Way of Things Being Done.

I think I just hate every team and every team's fans at this point. Nothing personal.

Who you got in the ALCS? Honestly, I think it's the best matchup for exciting baseball, but I'll have to favor the Boston Red Sox, because they belong in the playoffs and I'm just not sure Tampa Bay does, because in 1998 they were very, very bad. And those uniforms! Mercy.