Share All sharing options for: Mike Mussina returning to Baltimore: Yay or Nay? 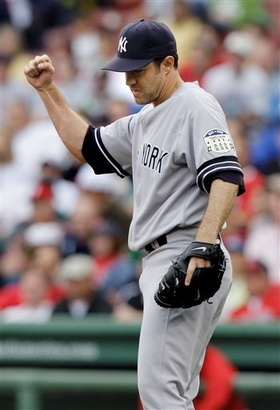 There has been a lot of talk all over the place about Mike Mussina maybe returning to Baltimore, at least in fan circles.

There are good reasons to do it, and good reasons not to do it. Of course, it may not matter, as most believe that Mussina, sitting on 270 wins, will retire. At least they believe that for now -- Mussina hasn't made up his mind, and says he isn't thinking about it right now, enjoying his time at home after his first 20-win season.

Let's just say that Mussina does decide to return in 2009. He'll be looking for a three-year deal.

Mussina, again, throws a good six innings still. He's a highly intelligent pitcher that has worked around a loss of velocity and stayed very competitive. The Orioles, even in a rebuilding phase, need guys that throw strikes, and Moose throws strikes.

He's also a guy that could assume a leadership role on the staff, a veteran that commands respect for his career achievements and the fact that he still gets it done.

On a three-year deal, Mussina would only need to average 10 wins a season to reach 300, and he'd do it as an Oriole. While he left for New York and angered a lot of Orioles fans (and I don't want to go into who's to blame again, because we know how I feel and I know how y'all feel), I still remember Mussina's time as an Oriole very fondly. He's one of the best pitchers this team has ever known.

He's going to turn 40. This is a team that is focused on the future. As many good things as there are to say about Mussina on the club, even in rebuilding, you can't ignore his age and the increasing likelihood that he gets hurt and misses a lot of time, and then what are you getting out of him?

He's going to be expensive. Mussina is not a man fixated on personal achievement, really, and I don't think anything he's ever done goes against that idea. 300 wins would be great, but I don't think that'll drive Moose to come back. If he comes back, it'll be to win a World Series, something that the Orioles can't offer.

At $15 million a year or so, are the leadership and the six innings really worth it?

I don't think it's as easy a question as it appears to be at first thought. There are some very nice things Mike Mussina could do for us, but the price will be steep and the rewards just may not justify the contract.

What say you? And, again, assume he's even going to pitch next year, and that he'd entertain the idea of doing it for a team that has no World Series hope.