Danys Baez could start next year, but he won't

Share All sharing options for: Danys Baez could start next year, but he won't 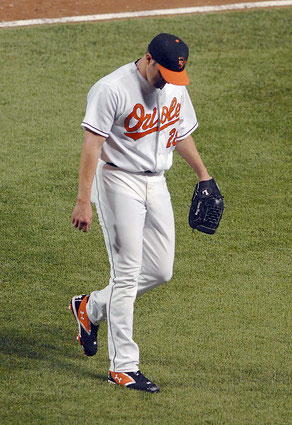 With as many as four openings in their 2009 rotation, the Orioles aren't ruling out any candidates to start, and that includes Danys Baez.

Baez, who hasn't pitched in a major league game since August 2006 and is trying to come back from ligament-reconstruction surgery, has informed team officials he wants to be a starter in the coming season. Signed to a three-year, $19 million deal after the 2006 season to set up closer Chris Ray, Baez hasn't started a game since 2002, when he went 10-11 with a 4.41 ERA in making 26 starts for the Cleveland Indians.

"He's expressed some interest in preparing himself as a starter, and we'll see how things go from there," Orioles president Andy MacPhail said. "It seems to make sense. I don't know if you lose anything by doing that. Preparing yourself that you are going to start is not going to retard your development whatever the role you end up being in."

First of all, I love Andy MacPhail's use of the word "retard" in this situation. That's a man willing to use the language.

But let's talk about Baez as a starter. The most important thing to realize, before we get into condemning or praising the idea, is that this is Danys Baez throwing a hail mary to save his career. He knows there's nothing important for him in the bullpen. Jim Johnson emerged as our #1 right-handed option this year, George Sherrill is an excellent LOOGy, and Chris Ray will be back. Zrebiec mentions the same thing, and I think it's very important to consider that Baez is essentially going last-ditch to be an important member of the club.

The last time saw Baez, he put up a 6.44 ERA in 50 innings in his first year as an Oriole. The signing of Baez was absolutely terrible and completely indicative of the way the O's used to do things in the offseason. They overpaid a guy who was, being kind, league average the year before, because he had nine saves for the Dodgers or because he'd racked up 96 saves from 2003-05 with the Indians and Rays. Nevermind that only 2005 was really anything close to a special year for a bullpen arm (2.86 ERA, but with lame K numbers and iffy walk totals).

The one year he's started in the majors, he was a back-end guy at best, and that was six years ago. He had control and pitch count issues. I remember watching one early-season game he started in Detroit that year, where it was snowing. I remember it because it was snowing, and also because Baez labored about as hard as anyone possibly could have while still getting decent results.

It is not fair to judge a guy by one game or one partial starting season (Baez started 26 times in 39 appearances in '02), but there's a reason no one has tried to start him since, and a reason why it's only after a bullpen has started filling out in his injured absence that he wants to take another shot at it. There's also a reason the Orioles are willing to let him, which is that it doesn't much matter.