Furcal going back to L.A.

Share All sharing options for: Furcal going back to L.A. 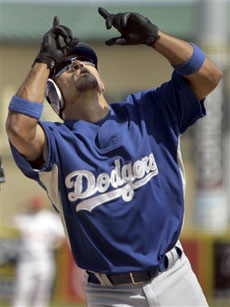 Tim Brown has the story:

According to sources familiar with the negotiations, talks between team owner Frank McCourt, general manager Ned Colletti and agents Arn Tellem and Paul Kinzer resulted in a three-year, $30 million deal.

Or a three-year, $33 million deal. Depending.

Nothing with the Furcal signing has been definitive, right until the bitter end. A Dodgers source said the contract is for $30 million and includes a fourth-year option for $12 million, vesting with 600 plate appearances in the third year. Other incentives could bring the total worth of the deal to about $42 million.

Meanwhile, the Associated Press, citing a person familiar with the negotiations, said Furcal will get $7.5 million next season, $9.5 million in 2010 and $13 million in 2011. The deal includes a $13 million team option for 2012 with a $3 million buyout, according to the AP, for a $33 million guarantee.

So after three seasons with the Dodgers, a dead negotiation with the A's, and a signed offer sheet to return to the Braves, Rafael Furcal is just staying where he's been. Go figure!