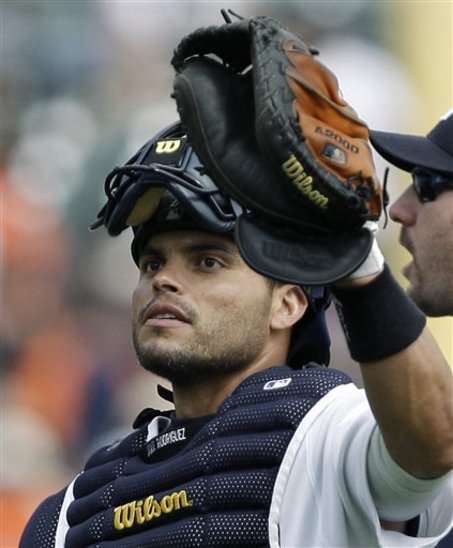 Former Oriole Gregg Zaun remains the free-agent catcher most likely to end up in the Orioles lineup on Opening Day, but there have been conversations with agent Scott Boras about veteran Ivan Rodriguez (left). Whether he would be a good fit to mentor Matt Wieters and eventually step aside for the O's top minor league prospect has been a subject of some discussion in the O's front office.

Schmuck considers the idea that if Wieters comes up mid-season, it would "create an uncomfortable situation." Frankly, I don't care. Pudge Rodriguez is 37 years old and can't hit much anymore, so if he were to have a hissy when Wieters took "his job," then oh well, trade him or waive him. It wouldn't be the biggest deal in the world, and Pudge's defensive reputation is well-earned. He'd be a great fit for what promises to be a crap pitching staff. I do worry Trembley would hit him in the middle of the order on name value.

He doesn't make mean faces quite as well as Gregg Zaun, nor is he related to Rick Dempsey (have you heard?), nor will he be totally dirt cheap. You pay for quality, I reckon, and it sort of reminds me of soda. Why go for Sam's Choice when for a little bit more you can get some RC?

With Ramon Hernandez gone, there's no catcher in this system that belongs starting in the Major Leagues besides Wieters, and they probably want to be cool about his advancement. Be it Pudge or Zaun, it's not a bad idea. Just keep Rick Dempsey away from me if we get Zaun.