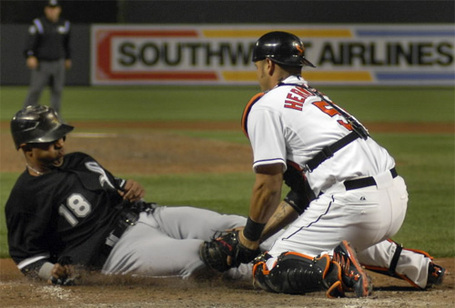 The Reds have reached preliminary agreement with the Orioles on a trade that will send catcher Ramon Hernandez to Cincinnati for outfielder Ryan Freel and two prospects, according to a major-league source.

The deal is pending the approval of the commissioner's office, because it involves a cash transaction of more than $1 million.

On Monday, major-league sources said the deal would not be completed unless the Orioles picked up a significant portion of Hernandez's remaining salary.

No word yet on the prospects, but this is really about getting rid of Ramon. He was a constant source of frustration last year behind the plate and wasn't much better hitting.  With our savior Matt Wieters on the fast track to the bigs, it was clear there was no place for Ramon. And if you're thinking he could have been a good backup guy once Wieters is called up, I direct your attention to a few years ago when Ramon was the new kid and Javy Lopez was the back up. It wasn't pretty.

Adios, Ramon. When I remember you, I'll try to remember your first year with the O's more than the last two.