Not much in the way of a crowd tonight. Announced attendance, apparently, was about 10,500. We really are the Major League Indians.

But to quote another quality sports movie of the same era, the sun shines on a dog's ass some days, Billy Hoyle. 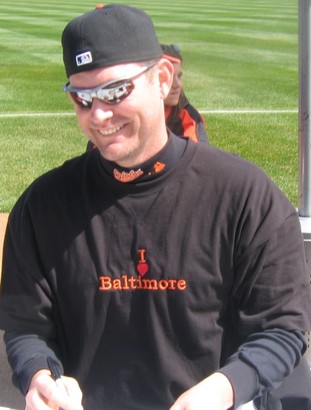 After what was a wonderfully laughable and cliché first inning from Daniel Cabrera -- out, single, steal, out, walk, home run, out -- the O's rebounded late to score a 9-6 win over the Rays, thanks to the heroics of the great and wonderful Aubrey Huff, everyone's favorite player.

Huff, who torched Tampa Bay last season, hit his first home run of the season in the sixth inning, chasing Matt Garza from the game and bringing the Orioles back into it, trailing just 6-5.

Prior to that, it had looked like all was lost. Brian Roberts led off the bottom of the first with a home run, but Cabrera was taken out in the fifth after failing to get a single out, striking out two and walking five, allowing six earned. He looked awful out there. Where are you, zknower? Defend your boy!

From there, Randor Bierd, Chad Bradford and Jamie Walker (who struck out the side in the eighth inning) held down the fort, and then, Huff struck again.

With two on, Huff drove one to the wall and cleared the bases, giving the O's a 7-6 lead. After the homer, he was still getting some boos -- by the way, if you were there and one of the people booing Huff for hitting a two-run homer, get over yourself. Seriously. After the game-changing double (Huff reached third on Nathan "Wille Mays" Haynes' error), it was all cheers for Aubrey.

If he wants to keep hitting like this, he can count me in as a fan, too.

Razor Ramon drove Aubrey in on a sac fly, and Adam Jones made it 9-6 with an RBI single that scored Jay Payton, who was running for Luke Scott and had stolen second base.

Quite a game for the revamped Rays bullpen, as last year's closer, Al Reyes, was shelled by the Birds to the tune of four earned in two-thirds of an inning, walking two and striking out none.

George Sherrill made the ninth inning interesting by pulling a John Parrish, throwing the ball with lots of movement all over the damn place, walking two and striking out two before getting pinch-hitting Jonny Gomes to pop out to center field, ending the game.

It's the days like these, where Jones hits and the bullpen holds it down and looks good and other things actually go right, that will make the 2008 season worth watching. Sure, it's just one win, and we'll see more days like Monday than tonight, but whatever. All I ask is that the team plays its ass off.

Good win. Fun night, as even Gary and Jim seemed to be having a good, wisecrackin' time. .500.

Oh yeah, Pat Sajak was there too.