A look at the Norfolk Tides

Share All sharing options for: A look at the Norfolk Tides

The AAA Tides kick off their season tonight with a game at home against Buffalo, so let's take a quick look at our boys in Norfolk.

The rotation should be a strong point, with (from left to right) Radhames Liz, Garrett Olson, Hayden Penn, Jon Leicester and James/Jim Johnson. All of them are at the point in their careers where they're available to be called up -- for some, that's good news, but for Leicester in particular, not so much.

I do root for Jon Leicester, who was once a high-ceiling prospect in the Cubs organization during the Wellemeyer/Mitre period, but he's never delivered on that ceiling. He went 0-11 with a 6.78 season in his last season with the University of Memphis, but was drafted in the 11th round of the 2000 draft just because he had really good stuff. Through the minor leagues, Leicester never once had a dominant season, though he fairly frequently had flashes of true potential. He smoked the International League last year while in Norfolk (3-3, 2.22/1.08, 65 IP), but struggled as usual once in the big leagues, posting a 7.59 ERA in 32 innings.

He was in the running for the fifth spot in the rotation this spring, but finished a distant third to Brian Burres and Matt Albers. It was to be expected. As far as the Norfolk rotation goes, Leicester is the one who probably, if you want to be honest about it, tops out at the level he's at. He's 29 now; if he was going to make a major league impact, he probably would have done it by now, though he might have a nice relief season or three in his arm.

Jim Johnson had a 4.07/1.43 ERA/WHIP at Norfolk last season, which was a big, big disappointment. As Baseball Prospectus put it, he's "the same pitcher he was three years ago; that made him one of the better pitchers in A-ball in 2005, but he was supposed to build on that, not stall." Johnson turns 25 in June. He'll need an impressive season.

Liz, Olson and Penn have already been discussed here recently. They should be a really strong front three for the Tides.

The Norfolk 'pen is filled with emergency call-up guys like Esteban Yan, Lance Cormier and Roberto Novoa. There's really nothing special there, except perhaps, maybe, for Bob McCrory.

As far as the position players go...well, that's a different story. 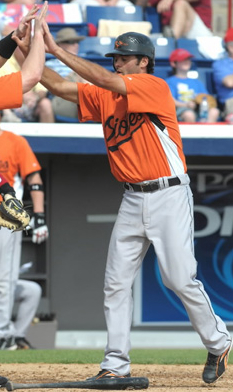 Only Mike Costanzo (pictured) is likely to really make any impact on the major league club. This is a pitching-heavy, hitting-light system, and Norfolk is your run-of-the-mill Triple-A team filled with minor league veterans and major league flameouts.

Among the flameouts is Tike Redman, a 31-year old ex-Pirates prospect who had numerous chances in Pittsburgh to win a major league job and never did so. After being out of the majors in 2006, Redman found himself in the independent boondocks last year before the O's signed him and assigned him to the Tides. At Norfolk, Redman hit .304/.372/.416 in 336 plate appearances, which is nothing special for a 30-year old outfielder who's had plenty of Triple-A experience, but it got him a trip to Baltimore for 139 PAs, where he hit an inspiring .318/.341/.462 and stole seven bases in eight attempts. He's not someone you should expect anything from (.253/.287/.327 at AAA Toledo in 2006, for instance), but good luck to him.

He'll be sharing the outfield most nights, I'd guess, with the returning Luis Terrero and Sebastien Boucher. Terrero, 28, hit .318/.367/.560 for Ottawa in 2006, but struggled between the White Sox and Charlotte last year. He's back in the O's system as a Triple-A filler.

I figure Boucher will get more PT than Adam Stern and Chris Roberson, but I could be wrong. And it also doesn't really matter. Stern's career highlight will forever be that inside the park home run against the United States in the World Baseball Classic, and Roberson can't play. Boucher has some wheels, like the other two, but is slightly younger. We got him in the John Parrish deal last year. None of them are going to be major league contributors, though Boucher has some nice on-base skills (.372 OBP in his minor league career).

The infield's best player, past Costanzo, is recent free agent pickup Alex Cintron, who is almost certainly going to be in Baltimore as soon as possible. Cintron is nothing special at all, but he beats the hell out of Luis Hernandez and Brandon Fahey, which is more unfortunate than anything. The O's probably want Hernandez to be able to play, but once he's past proving that he can't, Cintron will take his job. And Fahey is only there because the Cubs signed and released Cintron before the season started. If Alex had signed with the Orioles to begin with, he'd be in Baltimore right now.

33-year old Chris Heintz and Omir Santos will handle the catching duties. Heintz has been plugging away in the sticks since '96, when the White Sox drafted him. To put that into perspective, that was the second-to-last year the Orioles made the playoffs. The only way either of these guys sees major league time this year will be if Ramon or Quiroz live up to their reps and get hurt.

AAA is generally not the most exciting or interesting level of a minor league system, and that's true here, as well. It's a holding zone for fringe major leaguers in most cases. But 3/5 of this rotation could have beaten out Brian Burres this spring and I'd have been OK with that. That's something to pay attention to.