Share All sharing options for: Ten questions with John Sickels

John Sickels of Minor League Ball is one of the foremost experts on prospects today. Yearly, he publishes The Baseball Prospect Book, which is a wonderful resource for those with any interest in the subject whatsoever. If you wish to order the book -- and I sincerely do recommend it -- you can do so at JohnSickels.net.

I got the chance to send John some questions about the O's farm system recently, and he was kind enough to share his time and insight. While I'm "fairly well-informed," John for sure knows his stuff. Listen to him before you listen to me.

Camden Chat: How much has the Orioles system really improved since the dark days under Syd Thrift's watch? Has it really been much of a dramatic turnaround, or does it just seem like that because they were so incredibly bad?

John Sickels: Well it’s always a matter of perspective. I’d rate the Orioles system as slightly above average now, though not elite. There is more depth than there used to be, and a few guys who could be impact players. I think it is a legitimate turnaround.

Camden Chat: Scott Moore and Mike Costanzo seem to be essentially the exact same player. Is there really any difference in the two? Does one project as better than the other?

John Sickels: They are pretty similar, born one month apart. Both have power from the left side of course. Costanzo will draw more walks, but Moore has a bit more athleticism and is more versatile defensively, easier to fit on the roster in a reserve role. I gave them both Grade C+ ratings in the book, so yeah, they are very close.

Camden Chat: Nolan Reimold's injuries have been his burden during his rise through the system. At 24, is he behind what would have originally been considered on schedule, or is he still cutting a good pace?

John Sickels: Well he is behind, but much of that is because of the injury. Given how well he hit early last year in Double-A, he would probably have seen Triple-A and perhaps the majors at some point last year if he had not gotten injured. I don’t think it is critical yet, but he needs to have a good season this year.

Camden Chat: Does Brandon Snyder have a real major league future at first base?

John Sickels: I’m not sure he’s going to have quite enough home run power to be a starting first baseman in the majors. He’s just 21 and has time to improve that, of course. It’s much too early to conclude he won’t make it. But certainly the hill is steeper as a first baseman.

Camden Chat: How soon are we going to see Matt Wieters in Baltimore, and would you rank him among the five best position prospects in baseball?

John Sickels: I imagine you will see Wieters late this year or by mid-season 2009 at the latest. He’s really good, the hype is for real. I have him at Number Seven on the hitting prospect list, but he could be Number One or Number Two a year from now once he establishes himself and other guys ahead of him graduate. 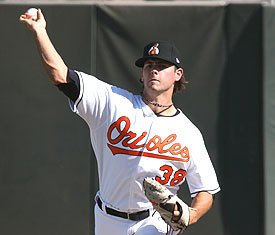 Camden Chat: Were the O's smart to go so far over slot to draft and sign Jake Arrieta (pictured)?

John Sickels: They got a first-round talent in the fifth round, so yeah I think it was a good idea. His command issues at TCU should be fixable according to what I’ve heard. I think it was a gamble worth taking.

Camden Chat: He's still very young, but how much does Brandon Erbe's disastrous 2007 at Frederick hurt his stock?

John Sickels: Well it certainly doesn’t help. His mechanics fell apart last year but supposedly he put them back together in instructional league. Assuming that is true, and that there is no underlying health problem that we don’t know about, he has a good shot at rebounding. We will see. I lowered him from Grade B+ in the 2007 book to Grade C+ in 2008, though I still like his long-term potential, assuming good health.

Camden Chat: Could Hayden Penn be another John Maine? That is, a guy that is at one point regarded as the O's best pitching prospect, then kind of gets lost in the shuffle?

Camden Chat: How high is Chris Tillman's ceiling? Some are regarding him as the potential gem of the Bedard trade.

John Sickels: I really like what Tillman did last year. The Mariners took a huge and reckless gamble in promoting him to the California League so quickly last year, but after a rough start he adjusted and made the decision look good in retrospect. I still think it was a stupid decision, putting a 19 year old kid with 8 Class A starts under his belt in High Desert, but Tillman made it work and he deserves all the credit for that. If he stays healthy and maintains his command, he can be a number two starter.

Camden Chat: Who looks like the better prospect -- Kam Mickolio or Tony Butler?

John Sickels: Mickolio will get to the majors first, but Butler is the better long-term prospect. He was extremely impressive late in the season in the Midwest League, showing a good fastball and a terrific changeup. He’s also extremely bright and motivated to succeed. Like Tillman, if he stays healthy he should be a very impressive pitcher, granted “if he stays healthy” is always the question with these young guys.

Camden Chat: Thanks, John. Your time and knowledge is greatly appreciated.

John Sickels: Thanks! I appreciate the opportunity.

Don't forget to visit Minor League Ball for daily prospect talk that is second to none.