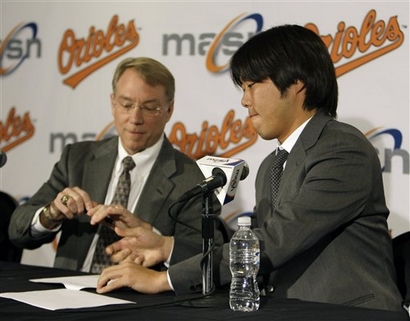 About 11 hours ago, Yahoo! Sports went and ran with an article that said the following:

It could explain why Barry Bonds’ attorneys believe the grand jury questions to him were impossibly vague and why the focus of the BALCO case veered from prosecuting distributors of illegal anabolic steroids and money launderers to catching world-class athletes lying about drug use.

Taking the Clear – the star drug of the Bay Area Laboratory Co-Operative – was not a crime, according to expert testimony included in grand jury documents.

Not only was the performance-enhancing drug tetrahydrogestrinone (THG) not specifically banned when athletes squirted "The Clear" under their tongues to gain an edge, the testimony also indicates that the drug wasn’t categorized by the Justice Department as a steroid until January 2005, long after the drug laboratory had been shuttered.

The Angels and Chone Figgins agreed to a one-year deal worth a little less than $6 million for a guy who had a .685 OPS last season.

The Cubs hope someone will buy the team. I'm hoping they don't waste my time by going to the playoffs next season.

Rick Reilly, super genius and best guy on the planet who's never done a bad thing, hates tattoos, and wants to remind you that JOSH HAMILTON TOOK DRUGS, has recently discovered beer pong.

John Smoltz says the Braves took him for granted, hoping to immediately clear his name with likely angry or bitter Atlanta fans that are pissed off that he signed with Boston for 2009. He could be a man's man and accept that people are going to hate him in Atlanta for the short-term, but he's also probably telling the truth. Or maybe he's 42 and starting the season on injury rehab and the Braves didn't have the resources or time to F around with that. You make up your own mind.

Yankees president Randy Levine won't be fighting the dorky Assemblyman that challenged him to a fist fight. Let me tell you what, gang, in MY view, nobody should ever pay for sports stadiums except for sports teams, blahr blahr blahr. Maybe the Yankees should've moved.

Elijah Dukes might go to jail. He's a hoot.

Back to stadiums: Bud Selig will let the Oakland A's talk to other cities about a new stadium if Fremont doesn't quickly approve one. Yeah, good time to push for a $500 million stadium, Bud. You're a f---ing champion of the world.

Fatty Bartolo Colon will get some sort of tryout with the White Sox. Guess who's coming to Twins spring training dinner? Luis Matos, Hands of Fate.

Andruw Jones will be totally released this morning. It was a hell of a run and ya gave it your best shot, Andy. Actually it wasn't and you didn't.

If you missed it, Rocco Baldelli signed with the Red Sox, too. And Paul Byrd decided he's the new David Wells.