Share All sharing options for: Press Conference for Nick Markakis

As I'm sure most of you know, there was a press conference at noon today announcing Nick Markakis' new contract. I wasn't able to catch it (stupid job) and it doesn't appear to be posted on masnsports.com or orioles.com. Orioles.com does have an article, and my day was absolutely made when I saw the accompanying picture of Nick: 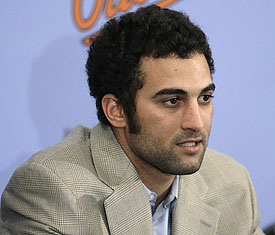 Dude, that hair has a life of its own. Last we saw Nick he was modeling the new O's uniforms and looking nothing like this. I know facial hair is more the thing on this blog but how can anyone not enjoy what Nicky has going on here?

Some feel good quotes from the press conference:

"If we had to choose one thing that we accomplished in the offseason, I think this would be the one thing," said MacPhail. "And it's also very appropriate that it's one of our own players -- a homegrown, drafted and developed player. The reasons for it are pretty simple and straightforward. In our opinion, Nick, at 25 years old, is already one of the premier outfielders in all of baseball. ... We think the best is yet to come."

"It was a fairly easy decision," Markakis said of his extension. "Believe it or not, I read the paper. I like to keep up with the team [and] see what's going on, and I think that had a big play into my decision. The money's definitely good. It's security. But you want to see the direction of where your team's going. The way Andy's been handling this, [and] since he's been here, I don't think I can complain with one move or one decision he's made."

We sat down with scenarios and where I would be in three years, hitting free agency. But you never know where you're going to end up. But with the way this team is growing -- and like I said before, with the moves since Andy's been here -- I can't complain about one move he's done. He really knows his stuff and he's done a lot for this organization. I think that's important."

If anyone sees the entire press conference online, please let me know. I'd love to watch it.  And see more of Nick's hair.