Share All sharing options for: Your likely 2009 Opening Day Orioles

What do you want? We're getting close to February and I'm getting antsy. 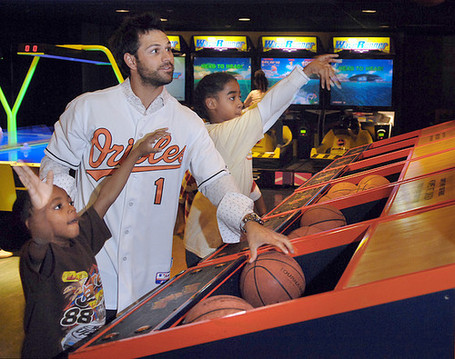 Brian Bob appears likely to return for his ninth season as an Oriole, and his sixth straight season as Baltimore's first batter of the year.

Roberts took over the leadoff role on May 21, 2003, in game two of a three-game series at Anaheim. Jerry Hairston, Jr., had been leading off prior to that, and was the team's starting second baseman. Roberts has not relinquished the role but for minor injuries and days off for the past five and a half years.

Roberts was 1-for-5 with a strikeout in his leadoff "debut" against the Angels, for the record.

The longest the Orioles have gone without Roberts' service as a leadoff man is 21 games (April 30 through May 23, 2006). In 14 of those 21 games, Sam Perlozzo hit Brandon Fahey leadoff. Ask again why Perlozzo was an idiot. But the team did go 8-13 in that stretch, since it happened early in the year and not during the usual late season collapse. 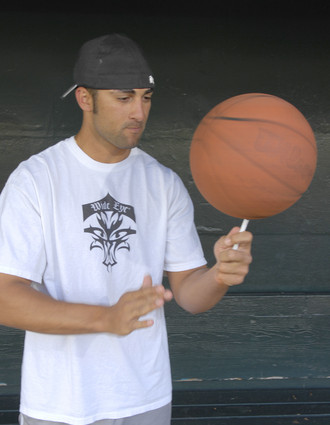 It's probable that the Orioles' first two hitters will be their best two hitters, which may change if the lineup needs to be tweaked to get Nick into one of the traditional run-producing spots.

Markakis' 2008 was fantastic and maybe silenced those from other team blogs that I had seen -- and they had their case -- say that Markakis was a good player, nothing more, and probably overhyped as a superstar of the future. Markakis is not Manny Ramirez or anything, and he likely won't become that. But he's gotten 50 points of OPS better in each of the last two years after a damn good rookie season. He's gone from .799 to .848 to .897.

He hits for average, gets on base, can run the bases, has B+ power, and plays a fantastic right field. If the Orioles actually get good, Markakis should be a frequent flyer for the Gold Glove, and should make his share of All-Star teams. The way it is now, Markakis' All-Star chances are slim due to the fact that the Orioles are generally only going to send one or two dudes, and outfield is a packed house.

These things are usually coincidence more than anything, but 2008 splits: 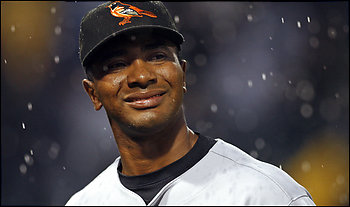 I expect Mora's good finish to 2008 will keep him in the three-hole to start the year, but when it comes to a 37-year old third baseman with this goofy a career arc, you buys your ticket, you takes your chance. Mora might flatline, and the truth is he'd probably have to hit with June numbers for three months to actually get replaced given that the options otherwise are Ryan Freel, Scott Moore, and Mike Costanzo, and while Freel is a perfectly capable major league player, he's most valuable when his versatility is being used to your advantage. 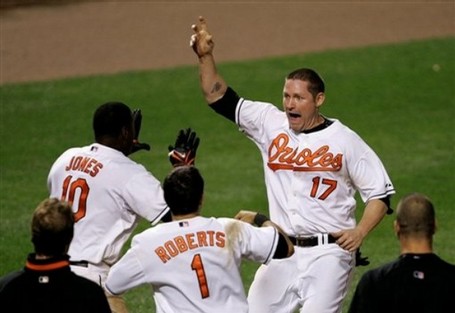 There is a disappointing lack of goofy Aubrey Huff photos. Just sayin'.

The AL's best DH looks like he'll be taking over full-time at first base with the overdue departure of Kevin Millar and the team's inability to find a suitable first baseman for 2009, even though they reportedly looked into such amazingly interesting possibilities as Richie Sexson and a conversion of 40 year-old Jim Edmonds.

First base defense is important in that it's important the guy be able to make it to the bag in time to field the throw and things like that, but you can get away with a brick s-house over there if he can do that and hit. Huff's not immobile or anything. He won't be as good as the actually sort of immobile Millar, whose glove at first base I will always trumpet as vastly underrated, but he should be fine. It's great to have a guy like Mark Teixeira (control your tears of anger, friends!) who can do it all, but outside of Albert Pujols, I'm not sure there's another guy like that in the majors.

If Ryan Howard and Carlos Delgado and the like can play first base every day, so can Aubrey Huff. The real burning question is whether he can hit like he did in 2008 now that it's 2009. In the immortal words of Gorilla Monsoon, "Highly unlikely." Let's temper expectations but stay optimistic at the same time. .280/.350/.500 sounds just fine by me. 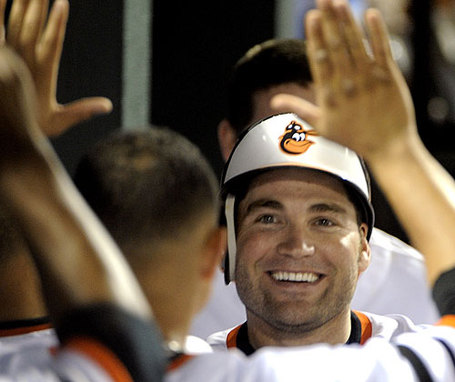 I don't think there's any argument that Luke Scott is cooler than he is really good, but he's a very serviceable bat to have around for a rebuilding project, and on a better team, he would be SUCH a fan favorite that he'd probably be forever memorable. Considering Luke probably won't be here by the time this team is any good, he'll be a memory only for folks like us that are watching all these crummy games.

Scott looks to inherit the DH throne from Huff, at least so long as someone steps up in left field between Pie, Montanez and Reimold. Freel is there, too, but again, he's probably best utilized by making his versatility the key.

Still, I foolishly hold out hope that Luke Scott could blast 35 bombs or something any given year. Hey, Aubrey Huff rebounded from an undeniable career downturn to go bananas last year, and Luuuuuke ain't old just yet. A few big hot streaks and he can do it. Scott is a lot like Millar in one way: when he's cold, he's really, really cold. It's to the point where if I'm Dave Trembley, I give Luke a few days off at the first sign of slump.

HOW AM I GONNA LEARN TO HIT IN THIS LEAGUE IF YOU'RE ALWAYS PINCH-HITTING FOR ME?

One thing I know for very certain damn sure guaranteed master lock: if the numbers stay as they were, Luke cannot be playing against left-handed pitching this season. He hit .215/.300/.402 last year against lefties. Throw Freel on the field somewhere and into the lineup on those days. Might I suggest Freel take some reps at 1B this spring for that reason? We've let Chris Gomez start at first base in recent years, so I don't see why not. 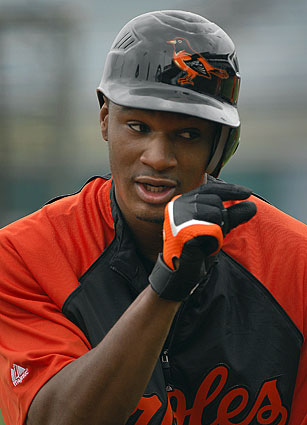 I'll admit that when the Bedard trade went through, as much as I loved it, and as much as I still love it, and as much as I love Adam Jones, there was that nagging part of my brain that focused on the dude's K-to-BB numbers in the minors, which were horrible, his lack of plate discipline, and the fact that he looked like another tools guy who would have to survive the harsh realities of talent at the major league level if he was to make it. A lot of guys can't do it. A lot of really talented players have been unable to make those final tweaks.

But watching Adam Jones last year, my doubts subsided. He struggled. And he adjusted. He was fantastic in center field and is another future Gold Glover, he picked up enough at the plate to instill real confidence in his future, and he always seemed like he was having a great time. Not a real analysis, I'm aware, but AJ was fun to watch because he seemed like he was having fun playing.

More is expected this season, obviously. That line won't cut it as far as goodwill goes. I think most of us expect at least 15 home runs (probably 20, really), a bump in the OBP and SLG numbers, the same great glove, and maybe even 20 steals. Jones is deceptively fast because of his long stride. When you watch him run, he doesn't look like he's going as quickly as he really is. He's not like Roberts, who seems like he's going 100 miles an hour. I think we all know he's quick, but I think he's probably even quicker than many notice.

Jones could also hit fifth if Trembley (1) wants to break up lefties Huff and Scott, and (2) has the gumption to do it without worrying about Jones' frail athlete psyche over a single spot in the batting order.

THE TURMOIL YOU HAVE CREATED IS NOTHING BUT A GRAIN OF SAND. A DESERT WHERE A FOX HOLE WILL BE CREATED, THAT WILL LEAD YOU DOWN TO DEFEAT.

WE NEED NOTHING TO DO WITH ANYTHING CLOSE TO PERFECTNESS. I'VE ASKED ALL THE SKELETONS THAT HAVE ALREADY MADE THE SACRIFICE TO FOLLOW ME AND THE ZAUNBIE NATION INTO THIS BATTLE! WHETHER TO WALK FARTHER THAN ALL THE REST, OR TO STAY BEHIND AND MAKE THE SACRIFICE. IT MAKES NO DIFFERENCE. I SURROUND US IN THIS FORCE FIELD AND WE HAVE BECOME ONE. WE HAVE FORMED A BOND LIKE NO OTHER. AND NO ONE CAN BREAK WHAT WE HAVE CREATED. THERE IS NO POISON, NO CREATION, AND NO MEDICINE TO CURE WHAT WE HAVE. YOU WILL NOT SURVIVE!

WHEN IN THE COURSE OF HUMAN EVENTS, IT BECOMES NECESSARY TO PROTECT MY INALIENABLE RIGHT TO BE THE STARTING CATCHER. I MUST DO WHAT OUR FOREFATHERS HAVE ALWAYS DONE. NEVER AFRAID TO FACE AN ADVERSARY. ALWAYS WILLING TO STEP INTO A NEW FRONTIER. ALWAYS WILLING TO MAKE A SACRIFICE. AND, YOU WILL NOT BE ABLE TO PREVENT THE ESTABLISHMENT OF A MORE PERFECT UNION BETWEEN ME AND MY ZAUNBIES. FOR THE SACRIFICE THAT WE ARE PREPARED TO MAKE AGAINST AN ADVERSARY IS FAR GREATER THAN ANYTHING YOU COULD EVER KNOW!

(Note: Gregg Zaun never said any of this.) 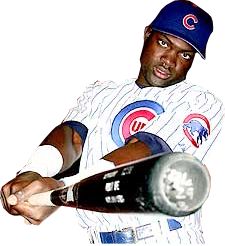 If I was a betting man, I don't think I'd bet on who the O's will actually start in left field on Opening Day. Felix Pie seems to be the dude they'd prefer; as the Cubs former No. 1 prospect, he comes with real talent and skills, but whether or not they're going to make him an effective major league baseball player is still up in the air.

So it's between 24-year old Pie, 25-year old Nolan Reimold, 27-year old Lou Montanez, and 33-year old scrapper Ryan Freel. Montanez did hit at Bowie last year and acquitted himself just fine in a trial run with the big club, but he's a distant third in terms of potential impact behind Pie and Reimold. Reimold still hasn't played AAA ball, not that that always matters. Markakis didn't either, but then Markakis has been in the majors for three years now and he's a month younger than Reimold, so that's a bum comparison.

I think the best case scenario is that it winds up being Felix Pie. Reimold has never been considered a top prospect. Pie has. If Pie pans out, that probably means more than Reimold panning out. Either are better than Montanez.

Pie does already have a great glove, which would mean we would have one of the best outfield defenses in baseball, period. 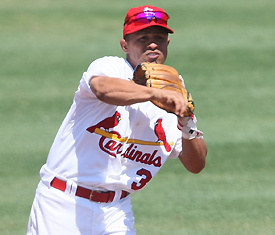 Cesar Izturis is here to play defense. As a distant second, he's here to hopefully poke a few singles at the bottom of the order and keep innings moving. But he's here to play defense after that pathetic display last year from the likes of Luis Hernandez (whose glove had been heralded in the minors, perhaps only because he couldn't hit his way out of a wet paper bag), Brandon Fahey, Alex Cintron and Freddie Bynum. Juan Castro did an OK job closing the year out, but when you're praising Juan Castro...

Izturis won a Gold Glove in 2004 and was an All-Star in 2005. He started with the Blue Jays, did his best work with the Dodgers, went to the Cubs, Pirates and Cardinals, and now returns to the AL East. He's a stopgap. He's not the future. But there's nothing close to a future star SS in this system, and someone had to do it. The revolving door last year was embarrassing. Izturis can't hit for beans, but neither could any of those schmucks last season.

Izturis is basically Castro-plus, a more advanced breed of the same player. I can live with it.