You all get the rules and the set-up by now (and if you missed anything, here's the intro and here are the game one results) 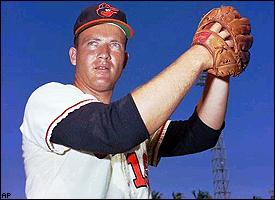 The Dukes of Earl 6, Jimmie's Jammers 1

The Dukes of Earl lead the series, 2-0

His counterpart for the '54 team, Joe Coleman, walked eight in 6.2 IP, giving up four earned. Frank Robinson kicked off the scoring with a solo home run in the fifth, and in the seventh the flood gates opened. After two quick outs, Brooks went yard, Davey Johnson doubled, Ellie Hendricks took an intentional pass, and then Belanger scored both on a double to left center. Even Dave McNally kept the inning alive with a walk, and then Bob Chakales came in to pitch. Buford flied out to right to end the inning.

The Dukes tacked on two more in the bottom of the eighth on a two-run blast from Boog. This is such a gross mismatch that I think the real bet is whether or not the Jimmie Dykes '54 O's can win a single game. A team that can't hit against three great starting pitchers.

Summary: First off I have to thank the always-awesome Orioles Card "O" the Day blog for providing the Kevin Brown card to your right. You have no idea how hard it is to find photographic evidence that Kevin Brown pitched for the Baltimore Orioles.

Jeff Manto! and Bobby Bo had two hits and a homer each for Regan's '95 squad, who chipped away with runs in the third, fifth and sixth innings, plus two more in the eighth to put the game well out of reach. But the story of the game would be Kevin Brown, who threw a one-hit shutout of the '63 Birds with four strikeouts and two walks (both to Jim Gentile, one intentional) over nine full innings.

Boog Powell got the only hit off of Brown, a groundball double down the right field line in the fourth inning. Chris Hoiles and Brady Anderson both had RBI doubles for Regan's team.

Milt Pappas was left in too long (8 IP) and Bonilla's two-run homer in the eight messed up his ERA. 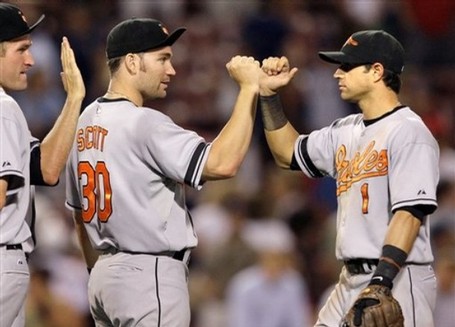 Diamond Dave and the Stars of Today 3, Davey's Goliaths 1

Summary: Another homefield advantage taken away.

Daniel Cabrera shuts down a pretty formidable lineup (7.1 IP, 4 H, ER, 4 BB, 7 K), so it's good to see that even in fantasy land Daniel Cabrera can still have a game that makes you think he might be worth a crap.

The big blow was a two-out, three run home run by Brian Roberts in the fifth inning, accounting for all of Diamond Dave's runs and chasing Jimmy Key after four and two-thirds, which seems a little knee-jerky at 66 pitches, but Davey J needed to see some Shawn Boskie. Boskie, Armando Benitez and Terry Mathews held the '08 team in check, but the Goliaths offense never kickstarted. They got one back in the bottom of the eighth off of Cabrera (Palmeiro singled Bordick home), and then Dennis Sarfate got the final two outs of the inning. George Sherrill got Hammonds, Hoiles and Bordick 1-2-3 in the ninth for the save.

D.Sarfate enters the game to pitch.
G.Berroa is plunked in the knee by a pitch.

The Richards-Harris Express lead the series, 2-0

Poor Sidney Ponson, he had no control. Ponson went 5 2/3 innings, walking five, striking out five, giving up seven hits and five runs (three) earned, and throwing 110 pitches before he was pulled. He allowed three runs in the first inning, all coming after getting the first two batters out. Jackie Brandt hit a home run, Gentile walked, Triandos singled, and Ron Hansen reached on a throwing error by Tony Batista. Whitey Herzog walked, scoring Gentile, and then Jerry Adair singled in Triandos. Milt Pappas grounded out to mercifully end what would've been one long, painfully slow inning to watch on TV.

Russ Snyder homered in the eighth for the Richards-Harris team. Adair was 3-for-4. Milt Pappas threw six innings of three-hit ball, then turned it over to Billy Hoeft, who went the rest of the way for a three-inning save.

Summary: Having dropped the first game at home, the Oatesimate Warriors were in a hole and needed the win.

Joe Orsulak hit a three-run homer off of 2004 Sidney Ponson in the bottom of the second, but the Mooks answered with two in the top of the fourth. Billy Ripken bobbled a ground ball that allowed Melvin Mora to score, and later in the inning Tejada scored when B.J. Surhoff sacrificed him in with a fly ball to right center.

Oates' team came hard in the bottom of the fourth. Leo Gomez singled in Randy Milligan and Joe Orsulak, then scored himself on a line drive single from Billy Ripken. Mike Devereaux singled in Hoiles. At the end of four, the '92 team was up 7-2.

The scoring subsided until the top of the seventh, when Mora singled in Brian Roberts. They chipped one more off the lead in the eighth when Bigbie drove in Palmeiro.

In the ninth, the Mooks opened it up. Ben McDonald was out, and Gregg Olson came in to close it out. He got Newhan on a grounder, but Mora and Tejada both landed bloop singles, and on Tejada's, Mora slid in under the throw to make it over to third base. Javy Lopez lined Mora home with a single, but then Olson got Palmeiro to strike out swinging.

With two out and two on, Surhoff kept it alive and cut the '92 lead to 7-6 with an RBI single. Gibbons walked, and Storm Davis came in to pitch. Davis walked Larry Bigbie, scoring Lopez, but got Brian Roberts to pop out to center field. The damage was done, and the game tied at seven.

John Parrish came in to pitch for the Mooks, and Randy Milligan singled to center. Joe Orsulak popped out to short, and Leo Gomez came to the plate. Gomez drove one to center, and Milligan got on his horse. Bigbie fired home, Milligan slid and was called...safe! The Oatesimate Warriors took the dramatic 8-7 win, evening the series at one game apiece.

The Advantageous Advancement of Altobelli lead the series, 2-0

Summary: Sam Perlozzo's excellent bullpen management was tested when starter Kris Benson walked six in five innings, leaving with the lead but always on the edge of danger. The '06 squad jumped out to a 2-0 lead in the first inning, but Eddie Murray got Altobelli back into the game with an RBI double scoring Disco Dan Ford in the third.

John Lowenstein poorly played a Kevin Millar bloop single to left in the sixth, allowing Ramon Hernandez to score and give Perlozzo a 3-1 lead. LaTroy Hawkins, Todd Williams, Chris Britton and Sendy Rleal all threw between Benson and closer Chris Ray, who had a 3-2 lead going into the bottom of the ninth.

Either Patterson or Markakis (I can't tell) made a ++ play on a Ford fly ball to right center leading off the ninth. Ripken singled, Murray singled, and Lowenstein struck out looking. Ken Singleton smoked a line drive single to right center, scoring Ripken. Murray made it to the third, but Rich Dauer stranded the runners by grounding into a 6-4 fielder's choice.

Mora, Tejada and Gibbons went 1-2-3 in the top of the tenth, and Ray came back out for the bottom of the inning. He got Leo Hernandez, but walked Rick Dempsey and was pulled. Bruce Chen, big loser in game one, came in again. He got Al Bumbry to fly out to right, and walked Disco Dan. Ripken kept it alive with a ground ball single through the hole at short, and Steady Eddie came up with the bases loaded.

What do you think happened, 1983 Eddie Murray v. 2006 Bruce Chen with the bases loaded and the game on the line? Single to left center, Dempsey scores, goodnight Irene. The run and loss were charged to Ray, but Chen was a goat again.

Summary: Heading into their three home games, Ray Miller's boys are up 2-0 on a couple of clubbing wins of Robby's Near Miracles, outscoring the '89 squad 18-8 in the first two games.

Beefcake Brady Anderson was 4-for-4 with two walks and three runs scored, and DH Harold Baines walked three times. Mike Bordick was 3-for-6 with three RBIs in the two-hole. Charles Johnson hit the team's lone home run, in the seventh inning, and well after most of the damage was dished out.

The '99 Birds scored once in the first, four times in the third, and five times in the fourth, taking a 10-3 lead and giving Scott Erickson plenty to work with. The good news for the '89 O's is that third baseman Craig Worthington tied for the early lead in the home run chase, with his second of the tournament ('66 Boog Powell is the other with two). The bad news is it doesn't look like his team will be in play long enough for it to matter.

Bob Milacki was scorched for seven earned in three and a third, and Brian Holton took a bit of a licking in relief, giving up three earned in 1.2 IP. The '89 team, despite their superior record, couldn't afford to get into a slugest with Miller's team, and that's what's happening.

The Bauer-y Boys 5, The Ripken Family 0

The Bauer-y Boys lead the series, 2-0

Summary: Poor Eric Bell, he shouldn't even be here. Bell was lit up for 12 hits and five earned in six innings, but by gum he battled as best he could, striking out five along the way. Curt Blefary hit a homer off of Bell, and Frank Robinson did, too, buuuut...

Hey, at least Robby's was an inside the park job. Luis Aparicio singled to lead off the game, and then Russ Snyder grounded into a 5-4 fielder's choice when he attempted to bunt Aparicio up to second. Why they didn't just run on ol' chicken arm Kennedy is beyond me, but hey, whatever. Buntin'!

Robinson came to the plate with Snyder on first, blooped one that ricocheted into the right field corner, and well, it was Larry Sheets in right field, so it wound up going for a two-run, inside the park home run. You'd hope that Fred Lynn would bust ass to get over and help Sheets out, but Fred was pretty old and injury-prone by now, so I reckon he didn't want to pull a hammy or anything.

Kennedy went 3-for-3 for the Ripken Family, which was their only bright spot. Palmer went seven strong and turned it over to Moe Drabowsky for the final six outs. Davey Johnson had three hits for the '66 team.