Share All sharing options for: Bye Kevbo, I'll miss you! 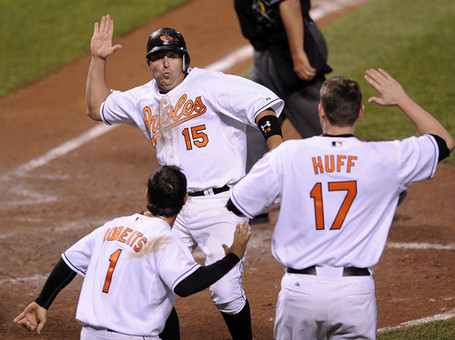 We all love Kevin Millar. Let's all stop acting like everyone here doesn't know that Millar is the s%^t. He is. He is the s%$t. Millar is our boy. ~SC

Per Peter Schmuck, the O's have officially informed Kevin Millar that his services won't be necessary next year. With the moves that have been made this off season it's been pretty clear that he wouldn't be back, but I never put anything past the Orioles. I'm slowly getting over that attitude with MacPhail in charge but it's a hard habit to break.

When Kevin Millar signed with the O's I wasn't thrilled. He was the Cowboy Up guy from the Red Sox and actually seemed pretty annoying. I could have never predicted how much joy Kevin would bring me over the last three years. Sure, Kevin was never a big star and we all know he secretly wished the Red Sox never broke up with him, but he made the most of his time here. He truly seemed to enjoy Baltimore and really just enjoyed playing baseball in general.

I know that people have split opinions on Kevin Millar, but to me he was a bright spot in a very dark period for the Orioles. Always good for a quote, always having fun, and maybe it was an act, but he actually seemed to believe in this team. As a player he may not have been a star but I always thought his glove was very underrated, and he was probably our most patient hitter other than Nick Markakis. The two images in my head of Millar playing will always be him dropping the bat right at home plate to head down to 1st with a walk and picking the ball out of the dirt at first.

If baseball remembers Kevin Millar, it will be for his time on the Red Sox (and rightly so). But in the end he spent as much time as an Oriole as he did a Red Sox and even though I believe he no longer has a place on the team, I'll miss his personality and his antics, and I'll always be a little bummed that I never got to go to Hooters with him.