The Dukes of Earl 11, Jimmie's Jammers 0

The Dukes of Earl lead the series, 3-1

Summary: In retaliation for the upset shocker of the '54 O's beating the '70 O's in 11 innings in game three, the Dukes come out and wail on poor Don Larsen and the rest of Jimmie Dykes' club, with Jim Palmer throwing a five-hit shutout and both Don Buford and Ellie Hendricks going yard.

Palmer himself drove in what would prove to be the winning run in the top of the second, singling home Brooks Robinson with a blooper to center field. That one run was all the team would need, but they piled on with 10 more to make a point. Hendricks' homer was a two-run shot in the fifth that got Larsen out of the game, and then with Mike Blyzka on the hill, Palmer singled again and Buford went deep. That four run inning made it 8-0, and it just kept going. Any hope the Jammers have of climbing back into the series rests on the arm of erratic ace Bob Turley in game five.

Considering Palmer did throw a five-hit shutout and also went 2-for-4 with an RBI and a walk, he was really the player of the game, but I wanted to get Ellie a photo op instead of just going back to Big Jim.

Summary: Both fourth starters (Jamie Moyer and Mike McCormick) turned it over to their bullpens in fair enough shape, and both bullpens did their job. It came down to clutch hitting!!!!

Moyer went 5.2, allowing one earned on five hits with a walk and a strikeout. McCormick went five, allowing just two hits, but walking four and striking out three.

The '63 O's went up 1-0 on John Orsino's RBI single, scoring Joe Gaines, in the fourth inning. In the sixth, the '95 team answered back. Dick Hall entered the game to pitch, and gave up a single to the woeful Manny Alexander. Alexander advanced to second on a Palmeiro groundout, and advanced to third on a Bobby Bonilla groundout.

With first base open, Hall issued a free pass to Harold Baines, which brought up Cal Ripken. Ripken made the Hitchcock boys pay for their foolish insult, grounding a double down the right field line, scoring both Alexander and Baines, who must've been on his horse something fierce.

The rest of the way, there were few baserunners. The '63 O's got a man on in the eighth, and got two on in the ninth, but were shut down. Doug Jones made the save interesting, pitching the ninth and walking Jackie Brandt, then plunking Al Smith, but he got Jerry Adair to line to short for the final out. Ripken's bat put them up, and his glove sealed it.

Davey's Goliaths 8, Diamond Dave and the Stars of Today 7

Summary: Jeffrey Hammonds can be your hero, baby. He can kiss away the pain. (Oh yeah!)

Wily Dave Trembley pulled the ol' switcheroo by starting lefty Chris Waters instead of righty Radhames Liz, as he decided that Waters' 11 starts were so much better than Liz's 17 that going by some sort of innings cap would be kind of stupid, considering we're talking half a season at most against a third of a season, so big whoop, you know? Let Muddy Waters get in there and show what he can do.

To counteract this tomfoolery, Davey Johnson gave Eric Davis the start in right field, and he delivered in the first inning with an RBI single. Kevin Millar put the Stars of Today up 2-1 with a second-inning, two-run homer. The next inning, Luke Scott scored Melvin Mora on a sacrifice fly to left field, putting Trembley's club up 3-1.

But the Stars of Today weren't done yet. In the fourth, the wheels came off for Goliaths starter Scott Kamieniecki. Millar singled, Roberts singled, and Markakis walked, bringing up Melvin Mora with the bases juiced and two men away.

Wuh-BAM! Break out the mustard and rye bread, grandma, it's a grand salami! 7-1, Stars of Today.

Speaking of wheels coming off...

Two men came across in the fifth against Lance Cormier, cutting the lead to 7-3. It was 7-4 after six. In the seventh, Palmeiro cut it to 7-5, scoring Davis on a groundout. After that, Berroa and Ripken singled, which set up Jeffrey Hammonds for a three-run home run off of Dennis Sarfate. Neither team scored again, though the Stars of Today threatened in the eighth, working two walks and moving both runners into scoring position on a Terry Mathews wild pitch, but ultimately Mathews struck out the side, getting Millar leading off the inning and Markakis and Mora to finish it. Randy Myers nailed down the save in the ninth, and the Goliaths survived with a remarkable comeback win.

The Richards-Harris Express win the series, 4-0

Summary: And the first team to advance to the second round is the fourth-seeded 1961 Orioles, led by Paul Richards and Lum Harris. Hal Brown went five innings (7 H, 3 ER, 3 K) for the win, and Hoyt Wilhelm pitched a perfect ninth inning for his first save of the tournament.

Grover's team went down fighting, though, tying the game at three in the bottom of the fourth inning, after home runs from Earl Robinson and Monster Jim Gentile put the '61 O's up 3-0. Conine, Marty Cordova and Geronimo Gil went back-to-back-to-back with RBi singles, but th Express grabbed the lead again in the sixth thanks to Ron Hansen plating Jackie Brandt. They extended the lead to 7-3 in the eighth when Whitey Herzog drove in Gentile and Hansen.

In the bottom of the eighth inning, Gil lofted a two-run homer to right center, the lone home run hit by the 2002 Orioles over their entire four games.

The Oatesimate Warriors lead the series, 3-1

Summary: Since winning the first game and taking home field away from the Oatesimate Warriors, the Mazzilli club has now crapped the bed, dropping three in a row and even losing to Bob Milacki.

Milacki went six strong innings, giving up two earned on five hits. Both runs allowed were solo homers, the first to Jay Gibbons in the third, and the second to Miguel Tejada in the sixth.

Mike Deveraux hit a two-run homer in the third -- his second dong of the tournament -- and Brady Anderson went 2-for-3 with two walks and three stolen bases, exposing the child-like arm of Javy Lopez. Daniel Cabrera took the loss for the Mooks, going five innings (4 H, 3 ER, 5 BB, 4 K). Joe Orsulak was 2-for-3 for the Warriors and was also hit by a pitch.

Over the final three innings, the bullpen collective of Storm Davis, Todd Frohwirth and Gregg Olson allowed just one hit for the Warriors, with Olson picking up the save by getting Lopez, Surhoff and Bigbie 1-2-3 in the ninth. 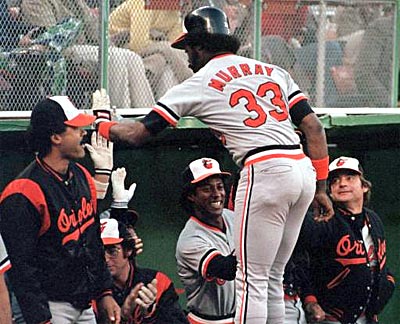 The Advantageous Appoiintment of Altobelli win the series, 4-0

Summary: So ends the journey of Sam Perlozzo, who only wanted to manage his hometown team and got dumped on for getting there. Three of these games were close, with the 14-2 blowout in game three the only exception, so his team went down fighting pretty hard all things considered. And by all things I mean the gross mismatch of pitching.

It was a see-saw game with a lot of pitching changes on both sides. Altobelli went up 3-0 and then 6-1, but Perlozzo's team rallied to tie it up with a five-run fifth inning which included a shellacking of Don Welchel (3 H, 3 ER, BB without getting an out). Murray immediately broke the tie in the sixth with an RBI single, but Corey Patterson tied it up in the bottom of the same inning with an RBI double, scoring Kevin Millar.

Markakis' RBI single in the seventh put the Perlozzo team up 8-7, but then what else could happen? Murray launched a two-run bomb in the bottom of the eighth, which would up winning the game.

Summary: The Why Not? O's could become that team again. Why Not? be able to come back from a 3-0 hole? It's just the '99 O's, a team that can lose four straight if anyone can. Pete Harnisch only made it four innings, but then the bullpen and offense won it.

The offense was switched up for this game, with the young Brady Anderson starting in center and leading off, subbing out the slumping Mike Devereaux. Anderson actually led off more games (60) than anyone else on the '89 team. Here, Anderson was 1-for-3 with three walks, three runs scored and a stolen base, but the big blow came off the bat of No. 9 hitter Billy Ripken, who launched a grand slam in the explosive seven-run ninth inning that put Frank Robinson's underdog team way, way ahead.

Jim Traber also got a start at DH, and he went 2-for-5 with an RBI. Orsulak, Milligan, Cal and Phil Bradley also had steaks for the '89 club. Both of the '99 team's runs were scored off the bat of Mike Bordick, who doubled in Delino DeShields and Brady in the fifth inning, giving Devil Ray's Team a brief 2-1 lead.

The Ripken Family 5, The Bauer-y Boys 3

The Bauer-y Boys lead the series, 3-1

Summary: The blind squirrels find four nuts (runs) in the first inning and hang on to dear life the rest of the game, holding off any rally attempts from the '66 World Champions and pushing this series at least one more game forward. Of course next they'll have to face Dave McNally, and if they win that they get Palmer, and if they win that, ace-in-the-hole Barber (2.30 ERA), but...

The Ripken Family had just six hits, making the most of their opportunities, notably a three-run homer from Larry Sheets in the first inning. Eddie's solo shot in the fifth completed the '87 team's scoring.

With his team trailing 5-1, Curt Blefary smacked a solo homer in the sixth, and down 5-2 in the eighth, Brooks did his part with another solo home run, cutting it to 5-3. But Mark Williamson came in to get the final two outs in the eighth, and then sent Etchebarren, Aparicio and Snyder back to the dugout in order in the ninth, giving the Ripken Family a 5-3 win and keep their minimal hopes alive.