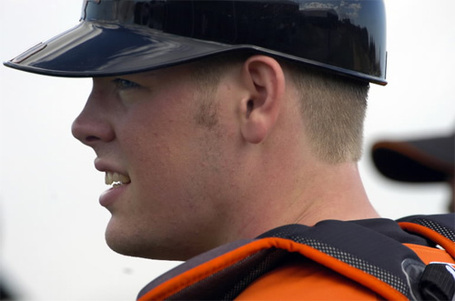 Wieters draws comparisons to two players: Joe Mauer and Mark Teixeira, who are two of the top hitters in the American League. Mauer has posted MVP-caliber campaigns in two of the past three years.

Who is Wieters to earn such praise before ever playing a big league game? He's a switch-hitter with quick wrists, power to all fields and a great eye at the plate -- all of which are traits he has in common with Teixeira, who, like Wieters, played at Georgia Tech. And like Mauer, Wieters is a catcher with a plus arm -- he also pitched in relief with the Ramblin' Wreck and would routinely sit at 92-93 mph. He's the best prospect in baseball right now, and should be in the majors this spring, perhaps as early as Opening Day.
-- Keith Law

Sure, it's definitely snowballed into "I'm not telling you anything you don't already know" territory, but it remains super exciting to keep hearing such ridiculous praise heaped upon an Oriole.