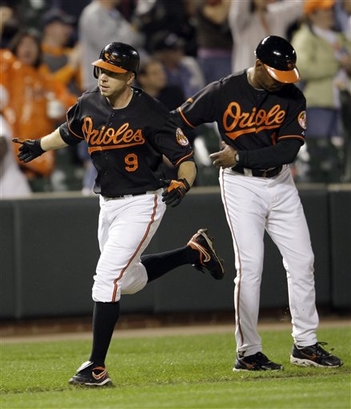 Time to stop calling him New Aubrey. Michael Aubrey owned the game tonight, hitting two home runs, a 2 run shot and his first career grand slam. And he continues to rock the awesome high socks. Since coming up from AAA he's held his own with the bat and he plays a heck of a first base. Per FanGraphs he's accumulated a WAR of 0.2 in his 28 games (not including tonight). In 110 games with the Orioles this year, the Original Aubrey's WAR was -0.5. I think it's fair that we disassociate the Aubreys.

Michael Aubrey wasn't the only Oriole to pound the Blue Jays pitching tonight. Matt Wieters had two hits, including a line drive 3 run HR to left field. Cesar Izturis added three hits and scored three runs, and Nick Markakis had a great night as well. Nick hit his 44th double of the year and was on base four times with three hits and a walk.

Jason Berken made his final start of the year for the Orioles and gave up 4 runs in 5 innings. It wasn't a great outing, but it was enough to get his 6th win. Matt Albers and Dennis Sarfate combined for three scoreless innings, and after a brief rain delay Chris Ray came in to pitch the 9th. He stank. He didn't record an out and allowed 3 runs, forcing Dave Trembley to bring in Alberto Castillo to close out the game.

O's win their second in a row with two games left in the season. Tomorrow's matchup is Mark Hendrickson vs. Scott Richmond. It's also Camden Chat night at the park, so if you want to meet up with us shoot me an email and I'll give you the details.