To all intents and purposes the American League East pennant race began at 10 o'clock last Saturday night in Baltimore's Memorial Stadium. That's when Earl Weaver threw a bag of sunflower seeds against the dugout wall and proceeded to engage the umpires in jaw-to-jaw combat. He had already been thrown out of the game, although he didn't realize it, and when Second Base Umpire Rich Garcia took the trouble to remind him, Weaver came out of the dugout, ran up and down three umps, paraded to second base and stood on top of the bag. Then he followed Umpire Steve Palermo home, and, with a malicious grin, kicked dirt between Palermo's legs and all over the plate while he was bent over trying to clean it. It was this bravura performance that signaled the onset of bona fide pennant hostilities. "I'd give Earl a 9.5," said Yankee Manager Dick Howser. "He didn't use his hat as well as he could have." 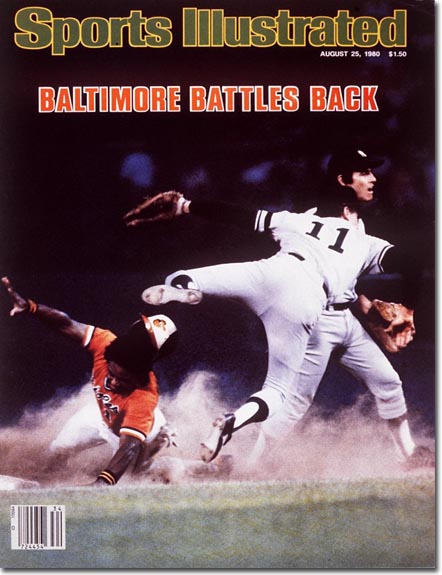 A little Friday afternoon stroll down memory lane. I stumbled across this awesome article a few days ago while rooting around for something else.

It's a great reminder of the Orioles' glory years; it also provides a fascinating snapshot into a time when baseball was a larger part of the national discussion, when reporting on the game focused more on personalities than statistics, and when print journalism was king: every sportsfan in the country looked forward to the day of the week that SI would arrive in the mailbox.

Now The Race Is On