Share All sharing options for: Cram the weepy apology, Alex 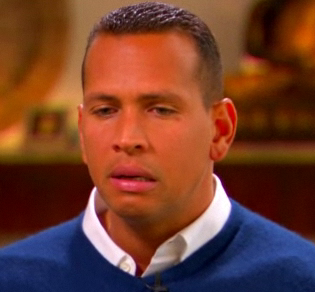 "When I arrived in Texas in 2001, I felt an enormous amount of pressure. I felt like I had all the weight of the world on top of me, and I needed to perform, and perform at a high level every day. Back then it was a different culture. It was very loose. I was very young. I was stupid. I was naive..."

So began the "tear-jerking" apology of Alex Rodriguez, who "admitted" to using steroids and testosterone in 2003 after Sports Illustrated broke the story of his positive test, which had never once been mentioned by anyone in baseball or associated with baseball. And the only indicitation anyone could have had was an overreaching suspicion of all baseball players or a belief in Jose Canseco, who becomes more and more credible as the days pass.

Alex Rodriguez will never be a beloved ballplayer. If he ever had that shot, this puts the nail in the coffin against the hope. He's insecure, he's whiny, he's off-putting, and he just doesn't seem like the kind of stand-up guy you'd want in your corner. The slapping incident from the ALCS a few years ago really started this train rolling. After that came the bush league move against the Blue Jays that wasn't a big deal, but because it was A-Rod, it was a big deal. As he stood on third base with a smug grin on his face, any red-blooded, Yankee-hating American baseball fan wanted little John McDonald to sock him in the nose. Why? Because A-Rod is that kind of guy.

And not that his personal life is anyone's business (I firmly believe this), the Madonna rumors and all that business did not help matters.

Now comes this saga, and if anyone was left on the fence about A-Rod, chances are they're off it now, and most of them are just never going to like the guy.

You don't have to be liked to be great, obviously. He's a great baseball player, same as Ty Cobb, Ted Williams and Barry Bonds, three of the biggest a-holes and most hated characters to ever play the game. The initial reaction might be that Rodriguez isn't in that group, and certainly he's not a violent racist like Cobb, who was living in a far different time than you or I can imagine, too.

But is Alex Rodriguez any less a jerk than Barry Bonds at this point? Bonds' ego was fragile and he alternated between shutting the press off and doing everything he could to anger them, then complained when the press dumped on him for either move.

Rodriguez's ego is also fragile. He's no Gary Cooper. Nothing he says ever seems genuine for whatever reason.

I'm not calling him a bad person. I'm calling him a tremendously hard to like person as far as his public persona goes. Maybe in his private time he's the nicest guy in the world. Maybe he's not.

All I know is that Rodriguez has now totally joined the list of guys I wouldn't like unless they were on my favorite team, and even then it'd be pretty hard. It's not because he took steroids, or that baseball tried to hide it for years.

It's because he's a chump and a fake. Not a fake because of the roids -- he's a great player no matter what. He's a fake because he's a fake person, period. Everything he says seems like a put-on. He's always playing something for some reason or another. Even this stunningly transparent "apology" is more angering than the fact that he cheated to begin with. At this point, who do you believe in as NOT a cheater at some time in their career the last 15 years or so? I don't care about what he took or even when he took it unless it's current, and it's not.

But the man can't even apologize without playing tiny violins for himself. Countless players have owned up to past mistakes and gone on with their lives. This will probably be a third of Alex Rodriguez's "woe was me" autobiography sometime down the line.

I used to watch Yankee fans boo Alex Rodriguez and think, "What a bunch of brats. This guy's the best player they have, and they blame him because this team can't win a World Series."

Turns out that, in my view, relentlessly harping on Alex Rodriguez is one of the smartest things the Yankee fans have ever done. They were right.