OK, now that most of my "busy" is over and I'm off the hook for Valentine's Day B.S., let's get back into the BOHMSS. Quarterfinals action!

The Dukes of Earl 4, Reganomics 0

Summary: Ellie Hendricks' third home run of the tournament gives him the most on the 1970 team, and pulls him into a third-place tie for the tourney lead with Bobby Bonilla (Reganomics), Frank Robinson (The Bauer-y Boys), and Kevin Millar (Stars of Today). 1983 Eddie leads with five, and 1966 Boog has 4.

McNally becomes the first pitcher in the tournament to win three games with a six-hit shutout of the '95 Birds, evening the series up at one game each. Kevin Brown -- who hsa been phenomenal -- was pretty good himself, going six and allowing just one earned.

With the score 1-0 on Ellie's second-inning home, all-time goat Armando Benitez gave up an RBI double to Mark Belanger in the seventh, and was charged for two more runs in the same inning, though Mark Lee was the pitcher in the game when both scored. 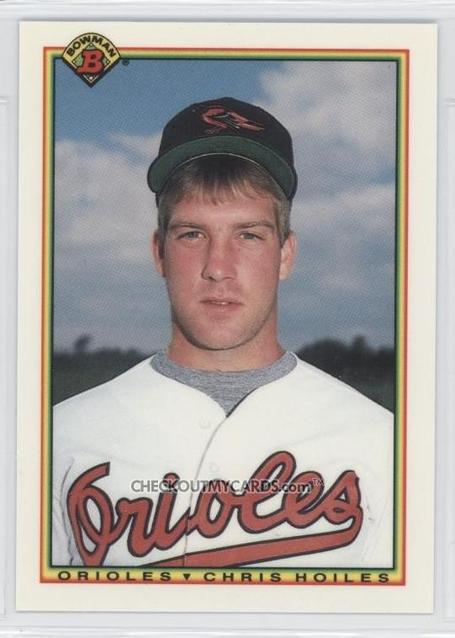 The Richards-Harris Express lead the series, 2-0

5 errors (all by the Goliaths).

19 pitchers used (11 by Goliaths, 8 by Express). The guys in the decision were Barber, who started game one, and Erickson, who was to start game three. Scott Kamienicki (DG game four starter) threw two-thirds of an inning and likely has to be bumped up to game three starter, with Erickson having gone four and a third. Mussina could start game four now, and then Erickson in game five perhaps? Or keep Kamienicki for four, Mussina five, Erickson six, Key seven... The biggest problem here is that they only have four starters with enough starts to qualify on the system to start a game. Fantastic!

Rafael Palmeiro grounded into a 6-4-3 double play that scored Brady Anderson in the top of the first, and then the Express tied it up at one in the third inning when Jackie Brandt singled home Brooks Robinson.

And then the game went on forever. Notable batting stats:

The only pinch hitters of the plethora used that got hits were Eric Davis and Jerome Walton.

R.Hansen lines out to SS.
E.Robinson hits a Texas League single to RCF.
J.Adair lines a single to LF. E.Robinson advances to 3B despite the throw.
M.Breeding enters the game as a pinch-hitter for S.Barber.
C.Hoiles can't handle the pitch and is charged with a passed ball. All runners advance. E.Robinson scores.

The Advantageous Advancement of Altobelli 7, The Oatesimate Warriors 6

Summary: Leo Gomez made two more of his famous errors, and the first one came in the second inning, allowing the '83 O's to go up 1-0. Cal got the '92 team into the game with an RBI single in the third, putting the Warriors up 2-1. The next inning a Joe Orsulak single put them up 3-1.

Rich Dauer's solo homer in the fifth pulled Altobelli back within a run, and then Murray tied it up with a dong in the sixth. In the top of the seventh, the Warriors stormed with three runs, going up 6-3. But in the bottom of the inning, Disco Dan Ford hit a two-run shot, and Storm Davis came in.

Storm immediately walked Cal, and then the obvious happened. Eddie Murray two-run home run, turns out to be the game-winner. Eddie's the hero again. Is he man?

Summary: Listen, what the f**k, yo? I'd say it'd be fun to root for the '99 O's because of the Cinderella aspect, sort of a George Mason kind of a deal, but George Mason didn't suck and make for a miserable summer IRL, y'know what I'm sayin'?

Cal went 4-for-4 with three runs batted in, Brady and Charles Johnson had three hits each, and the Ray Miller team slugs its way into another win.

The '66 champs had a 4-2 lead going into the sixth, but then the '99 losers exploded for five runs, capped by Ripken's three-run shot off of Moe Drabowsky. They tacked on three more in the eighth to seal the deal.