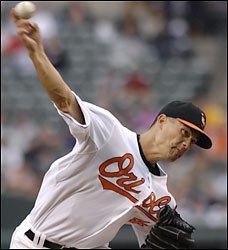 Orioles ace Jeremy Guthrie has been named to the final Team USA roster for the upcoming 2009 World Baseball Classic.

Guthrie, who had been included on the provisional roster, will leave the Orioles on March 1 and report to Clearwater, Fla.

"It’s a great honor to have been considered and then selected. I’m very excited to wear USA across my chest and to be surrounded by the type of players who will be on our team and the opposing teams," Guthrie said. "I didn’t expect it. I was grateful that I was even considered on the provisional roster."

Team USA will play three exhibition games before opening the WBC against Canada on March 7 in Toronto.

"They explained to me that they went through what appeared to be a pretty rigorous and detailed evaluation of each pitcher and made a selection they thought would be good for the team," Guthrie said. "It’s a really neat thing that, not only did they choose me, but they went through a process in doing that. It wasn’t just kind of a crap-shoot. They’re taking it real serious. It was neat to get that phone call."

Brian Roberts and George Sherrill are also on the provisional roster but haven't been contacted yet. Go get 'em, Brian! George...save your arm. What with Jamie Walker as the other lefty, we're gonna need ya, big guy.

Of all the things the Orioles are sending somewhere, it's a pitcher. How do you like them apples? Of course Daniel Cabrera was on a team in the last WBC, so it's not really all that amazing. But I'm happy for Guthrie. Fingers crossed he doesn't do something to his elbow or shoulder or labrum or whatever.