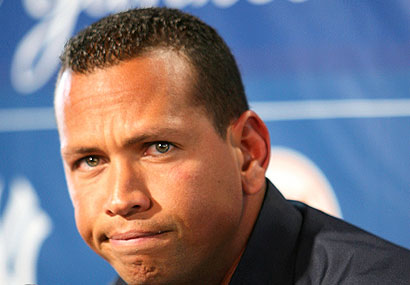 Hello, everybody, and welcome to another edition of Professional Athletes Think We're All F***ing Idiots. Our guest this week: Alex Rodriguez!

Alex Rodriguez answered one big question Tuesday, admitting his cousin repeatedly injected him with a substance from the Dominican Republic.

The New York Yankees star blamed his 2003 positive test on being young and naive.

“I knew we weren’t taking Tic Tacs,” said Rodriguez, who was joined at the head table by Yankees general manager Brian Cashman and manager Joe Girardi.

Rodriguez said his cousin introduced him to “boli,” saying it was an over-the-counter substance in the Dominican. While with Texas, he said his cousin injected him about twice a month during six-month cycles to get an energy boost.

“I didn’t think they were steroids,” he said. “That’s again part of being young and stupid. It was over the counter. It was pretty simple.”

“All these years I never thought I did anything wrong.”

I have had it with this crap. And that's exactly what it is. It's crap.

This is a grown man blaming his cousin for a positive performance-enhancing drugs test from six years ago. Look, guys did steroids. They probably still do something that baseball's testing can't pick up. And this is the same in other sports, too, but undeniably for whatever reason, baseball has been the most horrific and disgusting display of this by far.

What makes it worse and pisses me off as a grown-up and a baseball fan is these guys throwing around these B.S. excuses like kids trying to explain why they're sick all day after a kegger when they were supposed to be at Jimmy's house watching a Rocky marathon on SpikeTV.

Rodriguez has said he took stuff from 2001-2003, right? And his excuse is being "young and naive." He was 26-28 during this timeframe. Am I to believe he was so clueless that he didn't think, "Hmmm, maybe I shouldn't 'let my cousin' inject me with something 'over the counter' from the Dominican Republic..."

How brain dead and moronic do these people think we are? I turn 27 next month and I'm not a multimillionaire professional athlete with a reputation to uphold. I'm also no genius. If someone came to me and said, "Hey man, take this stuff, I got it from the Dominican Republic, it's totally legal down there," I think maybe I might use the f***ing internet and look this thing up. WebMD, Alex! WebMD!

There are so many holes in every cockamamie story like this that it seriously burns my ass to read these guys and then have sportswriters congratulate them for "admitting" they did something wrong. Every single one of them is apparently closer to Forrest Gump than your average human being, because NONE OF THEM knew what they were doing, apparently. It was all an accident!

And this guy -- the biggest superstar and arguably best player in baseball -- has the gall to do it NOW, when the public has largely accepted that pretty much every one of our favorite baseball heroes was juicing at some point.

I've got a new least favorite baseball player, and it isn't even close. And the worst thing is I know that he's got a good argument that this thing never should've come out, and Major League Baseball needs to release those other 103 names because hate him as a ballplayer and public figure though I may, the other guys don't deserve passes if we're going to make Alex Rodriguez go through press conferences and concoct idiotic stories to convince us of his naive mid-20s youth.