Summary: Kevin Brown threw a one-hit shutout in game two of the series, and outdueled Milt Pappas for the second time here in game six, closing out the 1963 Orioles and advancing Reganomics on to face The Dukes of Earl in the second round.

Brown allowed a run in the first inning, as John Orsino singled Russ Snyder home, but went five more innings of pretty flawless ball after that before handing it over to the bullpen.

Trailing 1-0 in the seventh, Bret Barberie led off for the '95 O's with a single, followed by Harold Baines singling in a pinch-hit at-bat for Brown. Brady Anderson doubled home both runners, which was all the team would need. Doug Jones nailed it down in the ninth inning for his second save.

One of my favorite things about Doug Jones was his early 90s Score Dream Team card (second from the bottom) which featured a moustachioed Jones staring at a flaming baseball. This is most humorous because Jones was a pitcher that heavily relied on changing the speed of his changeup, similar to another former Oriole bullpen anchor, Stu Miller. 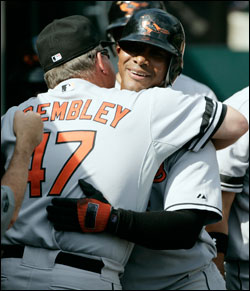 Diamond Dave and the Stars of Today 6, Davey's Goliaths 4

If the Diamond Dave team hadn't blown that 7-1 lead in game four, this baby would be over and we'd have the 5-12 curse coming into play in our tournament. As it is, we might still see it.

Daniel Cabrera dominated in his first start, but this time was very Daniel Cabrera (6 IP, 9 H, 4 ER, BB, 3 K) without the walks. Adam Jones put the Stars of Today up 3-1 with a two-run, second inning homer, but Geronimo Berroa's solo shot in the third made it 3-2.

Robbie Alomar and Surhoff both had RBIs in the seventh, putting the Goliaths up 4-3 late in the game, giving them the chance to close out the series. They even got to the ninth with the same score, turning it over to Randy Myers. From the boxscore:

R.Myers enters the game to pitch.
A.Jones grounds out to SS.
K.Millar swings and misses for strike 3.
J.Castro hits a triple.
B.Roberts hits a Texas Leaguer to RCF for a double. J.Castro scores.
N.Markakis hits a laser beam into RF for a double. B.Roberts scores.
M.Mora grounds it thru the hole to LCF for a single. N.Markakis scores.
A.Rhodes enters the game to pitch.
A.Huff pops out to 2B.

So now leading 6-4 in the ninth, the '08 O's turned it over to George Sherrill, who made it interesting as usual:

G.Sherrill enters the game to pitch.
R.Alomar pops out to 2B.
R.Palmeiro smokes a line drive single to LCF.
G.Berroa swings and misses for strike 3.
J.Castro boots a routine grounder and C.Ripken reaches on the error.
B.Surhoff hits a shallow flyout to LCF.

We'll get one game seven out of this first round. Otherwise, the quarterfinal matchups are set: