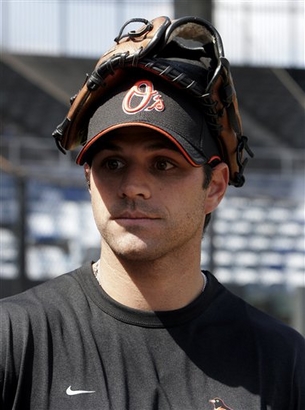 I realize most of you guys are going to just be very happy that Roberts has signed the extension. There are reasons to be happy. There are also reasons to be very skeptical and wonder how this will look down the line.

Counterpoint: He's 31. He just had the second-best season of his career, and before that he'd had a good year, too. Three of his last four have been very good, with one truly exceptional. The other one when he hit .286/.347/.410 wasn't so great. It was OK, but at $10 mil per numbers like that could start being a problem.

Point: He's a Baltimore Oriole. He's grown up in this organization and by giving Markakis an early extension and raise and extending Roberts, the team shows that it takes pride in the few good players they've developed this decade.

Counterpoint: If he starts declining, it won't matter where he came from.

Point: He has skills (patience and speed) that do tend to age fairly well.

Of Roberts' ten most similiar batters, picking out the second basemen leaves you with Fred Dunlap, Mike Lansing, Adam Kennedy, Fernando Vina and Damaso Garcia. Roberts' numbers are also a bit screwy because he's had two careers: pre-2005, and 2005-present. He was a very different hitter before 2005.

Dunlap was out of baseball after his age 32 season, but that was the 1800s and he died at the age of 43, too. Slightly different world at the time.

More contemporary guys like Lansing, Vina and Garcia offer up similarly bleak outcomes, though. Lansing was done at 33. Vina was done at 35. Garcia was out of baseball at 34.

Kennedy is still playing and turned 33 in January. He had a nice bounce-back year in 2008, which didn't make him a "good hitter," but put him back at his career norms after a disastrous 2007.

When Roberts' contract ends after the 2013 season, he'll be 36 years old. If you think this extension is the end of the Roberts talks every year about whether or not he'll be traded, think again. This contract is going to make them think long and hard all the time about where Brian will be by the end of it, and whether or not they better sell high at some point.

The guy is one of my favorite players and I love having him on the team. I'm glad for the time being that he'll be staying because I like him a lot and he's a damn good player. I just don't want to act all surprised if in two or three years this deal isn't looking so good for us, and we as fans are complaining that he's not "earning his keep" relative to the contract.