Jay Jaffe of Baseball Prospectus used PECOTA to predict 2009's list of breakout candidates and Adam Jones made the list.

Acquired from Seattle last winter in the five-for-one Erik Bedard swap, the 23-year-old Jones is expected to be a cornerstone of the Orioles' resurgence. His first year didn't go quite as planned thanks to an ugly 4-to-1 strikeout-to-walk rate and a dreadful September (.228/.262/.380) following a return 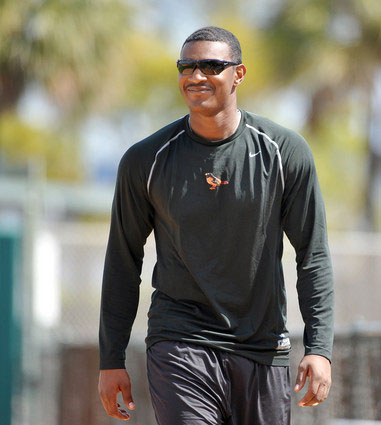 from a broken foot. Despite his problems controlling the strike zone, PECOTA sees enough in Jones' combination of speed, power, and defense that his top comparables are Andre Dawson, Ellis Burks, Dwight Evans, and Garry Maddox, a quartet that combined for 13 All-Star Game appearances, 10 Top 10 MVP finishes, and 25 Gold Gloves. Speaking of the Oriole outfield, keep an eye on recent acquisition Felix Pie, who fell just short of this list and who will flank Jones in left field.

2009 is a a big year for Adam. He didn't have a great 2008, but it was his first year full time in the majors and we knew we'd have to be patient. The comps listed above are pretty exciting, I think. If Adam can end up with a career like any of those (except perhaps Gary Maddox who's name I didn't know and had to look up) I'll be quite happy.

All reports from Spring Training are that Adam bulked up this winter so if he can improve his plate discipline and add in some power he could end up being one of the best things about the 2009 season. PECOTA seems to support that as his projection gives him just a slight raise in batting average but considerable boosts in OBP and SLG.

Isn't it nice to have good things to say about the Orioles?