Prop Projections for the 2009 Baltimore Orioles

Share All sharing options for: Prop Projections for the 2009 Baltimore Orioles 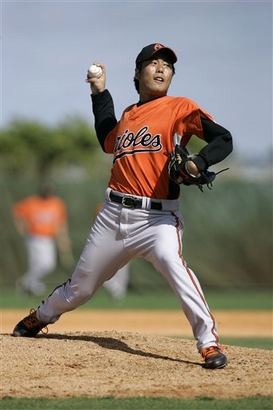 I don't want to do a whole community projections project this year for a few reasons. One, it's a chore to put together after your average long and exhausting Orioles season, and I couldn't even be bothered last fall. What's the point? Hey did we get Jeremy Guthrie's win total right, yaaay we went 68-93...

So instead of full projections, how about some prop bets? We'll play with Camden Chat Monopoly money here.

It's basically just over/under and this guy or that guy stuff, pretty simple really.

We'll come back to this in October and see how everyone did.

IMPORTANT: Write down your bets in a word processor or notepad or whatever BEFORE you go into the comments. No influencing. No debating. Just make the bets. You can say, like, "Damn, that's a gutsy bet..." to someone else or make comments on your own bets. I'll put mine down once some of you get yours in. Scouts' honor, I already have mine written down.

3. Who will hit more home runs in April: Melvin Mora or Aubrey Huff?

4. Who will win more games in June: Jeremy Guthrie or Koji Uehara?

6. Who will start more games at catcher: Gregg Zaun or Matt Wieters?

7. Who will hit more doubles: Luke Scott or Melvin Mora?

8. Who will make more starts: Rich Hill or Mark Hendrickson?

11. Who will have more strikeouts: Chris Ray or George Sherrill?

13. Who will have less appearances: Danys Baez or Kam Mickolio?

15. True/False: Nolan Reimold will start at least 12 games for the Orioles.

17. Who will hit more triples: Brian Roberts or Adam Jones?

19. True/False: Hayden Penn will start at least seven games for the Orioles.

20. Over/under, number of pitchers who start games for the Birds: 12.5