Share All sharing options for: Rich Hill: Mishandled? Misunderstood? A genius? Bad back? 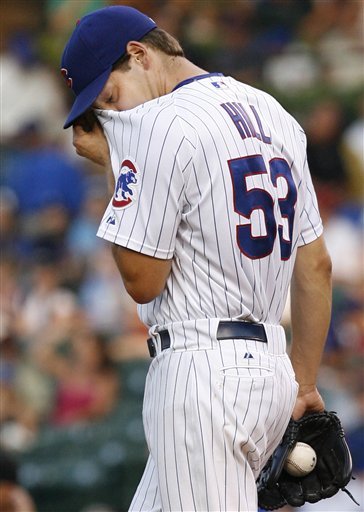 One of my favorite O's blogs is Weaver's Tantrum, which is a great blog name, by the way. Desert O posted a Rich Hill 2008 timeline yesterday that makes his season seem a little more peculiar than just the loss of control:

BTF's Transaction Oracle weighs in on the Hill pickup, too, and it's pretty much exactly my thoughts:

This is exactly the type of move the Orioles should be making. There are very good reasons to think that Rich Hill will be a terrible major league pitcher in 2009, but the Orioles rotation is made up of Jeremy Guthrie and terrible major league pitchers, so the consequences of Hill continuing to have serious command issues are relatively minimal for a team in Baltimore's position. If Hill doesn't rebound, let's say he throws 100 innings with an ERA of 7.00. Given that the alternative would be a player that will probably throw 100 innings with an ERA of 6.00, we're only talking about the loss of a win or so. The Orioles go from a 72-win team to a 71-win team. Whoop de doo.

But what if Hill does turn it around, which is at least a possibility? The team gets Hill for 4 years and if he does bounce all the way back, that's a ridiculous deal considering how small the risk is. Even if he only bounces back enough to be a 90 ERA+ pitcher, with an ERA around 5.00, he still is an upgrade over what the Orioles have.