Share All sharing options for: BOHMSS 2K9 - Quarterfinals, Game One (Part One) 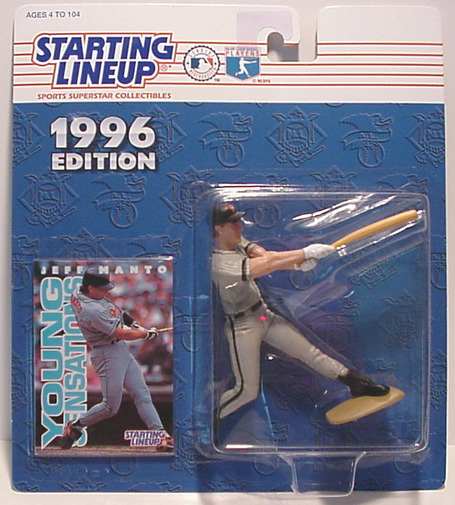 Reganomics 7, The Dukes of Earl 4

Summary: Jeff Manto (whose '96 Starting Lineup figure is to your right) hit a three-run homer and had four RBIs on the game, leading the '95 O's to an upset game one victory over the great Dukes of Earl.

Jim Palmer had a horrible bout of wildness, walking eight and striking out seven in five and a third. After Palmer was taken out, the '70 bullpen shut the '95 offense down completely, not allowing a hit the rest of the way. They did walk two more, meaning that Reganomics drew 10 walks in the game, which enabled them to score seven runs on just five hits.

Manto's fifth inning homer put Reganomics up 3-0, and in the top of the sixth, they piled on four more. Palmer walked in all four of those runs. The sixth inning:

The Dukes did put three across to cut the lead to 7-3 in the sixth, and added one more in the seventh on Ellie Hendricks' solo shot. Mussina went the distance for the win.

The Richards-Harris Express lead the series, 1-0

Summary: Second baseman Jerry Adair drove in both runs, one in the second and one in the seventh, and Steve Barber shut out the Goliaths, scattering four hits over nine full innings.

Adair was 2-for-3 overall, and Russ Snyder had a pair of hits as well. The Goliaths thus far haven't performed and I'm pretty sure they lose this series convincingly. This is clouding my Davey Johnson memories, I have to admit.

'97 Mussina struck out nine and walked just one in his seven innings of work, allowing seven hits. Brady, Alomar, Palmeiro and Hoiles all had hits for the Goliaths, and all were singles. In fact the only extra-base hit in the entire game was a double from Whitey Herzog.