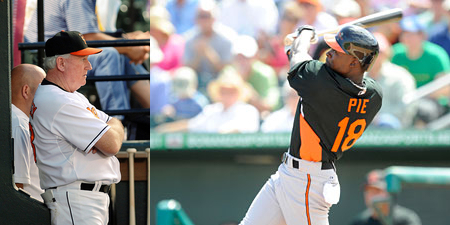 Camden Chatters of a certain vintage know that Terry Crowley is hardly a fan favorite 'round these parts. I think he's a nice guy, just not much of a hitting coach. He has his defenders, both in fan circles and among players.

In order to convince Felix Pie to listen to him, Terry Crowley dropped some names on the former Cub:

"It wasn't so much, 'Ask about Crow as a hitting coach.' It was, 'Ask about Crow as a person. Is he going to stand by you during tough times or is he going to turn his back on you and walk away?'. " Crowley said. "I encouraged him to call those people that know me from different walks of life. I know he's talked to them and now he knows a little bit about Terry Crowley the person."

Still, I'm not nit-picking. It's a cute spring training article.

Pie's work ethic has impressed team officials. One day last week, he was in the batting cage by 8:30 a.m. He later took regular batting practice on the back field as Crowley stood behind him and offered encouragement and advice. When he was done, Crowley put his arm around the new Oriole, praised his batting-practice round and reminded him to "have fun" as Pie trotted out to the outfield to shag fly balls.